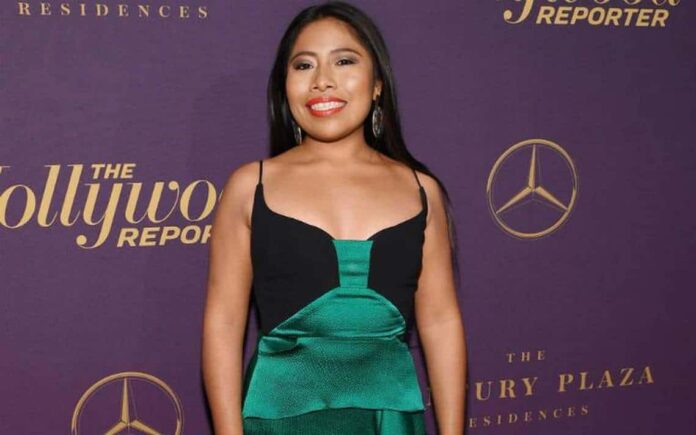 The Mexican star who went from teaching at a pre-school to becoming an award-winning actress Yalitza Aparicio starred as Cleo in Alfonso Cuarón’s award-winning film Roma in the year 2018 and became popular all over the world because of success of the film.

With the thought that her then-pregnant sister might end up being a victim of human trafficking, Yalitza was lucky that she accompanied her sister to her casting session. As her sister backed out from the audition, Yalitza got the part. She has also become a social media star after the release of the movie and has a huge fan following as well.

Born on the 11th of December 1993 Yalitza Aparicio will turn 27 years old in the year 2020. She doesn’t appear to be much taller and her height measures 5 feet 2 inches while her weight is 57 kg approximately. She has a healthy body figure and her body figure measurements are 35.5-30-37, she wears number 5 in the shoe size. She has dark brown eyes and the color of her long and straight hair is black.

Yalitza Aparicio was teaching preschool before she entered the Hollywood entertainment industry. This actress from Mexico received widespread popularity after her work in the film Roma which was released in the year 2018. She has earned most of her wealth through her work in the film as well as her work as a teacher. The total net worth estimated for Yalitza Aparicio is $350 thousand US dollars as of now.

Yalitza Aparicio was born and raised in Tlaxiaco, Oaxaca, Mexico. She has been quite private about her personal life but it is known that she was raised by her mother along with three siblings.

She has also not disclosed the educational details but it is known that she completed her High school graduation. The talented actress has also refrained from sharing the details about her dating life.

Yalitza was working as a teacher before she entered the acting world. Her movie, Roma is Yalitza’s biggest break and she has received several awards and nominations for her brilliant work in the film.

Her gentle, delicate, stoic and selfless acting and portrayal of the character has won the hearts of many from the world, and the fact that she has no experience in acting has given her performance new heights. What led her to several awards, nominations, and honors was her outstanding acting in the movie and she was also considered as the sparkler of this phenomenal film.

Becoming the first Indigenous American woman who was nominated for the Academy Award for Best Actress, and the second Mexican woman to receive a Best Actress Oscar nomination, she managed to it because of the great work from the legendary director Alfonso Cuarón. In January 2019, Yalitza also appeared on the cover of Vogue and Vanity Fair magazine.

Here we provide you the list of Yalitza Aparicio’s favorite things. Some Interesting Facts About Yalitza Aparicio