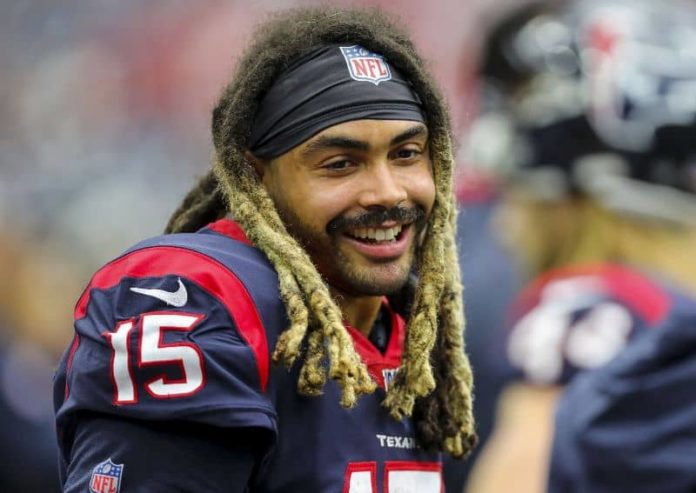 Success is the child of hard work, determination, and perseverance, this line has been very well proved by ‘Will Fuller’ who is an American football player. He is born with the full name of William Vincent Fuller V. Fuller plays as a wide receiver and currently plays for the Houston Texans of the NFL.

He earned an All-American mention after leading the college to the unsuccessful Fiesta Bowl campaign in 2015. Moreover, for using Performance-enhancing drugs, he faced 6 games suspension on 30 November 2020.

Born on 16 April 1994, this handsome player has turned 28 years old. He seems enough tall with his height which is 183 in centimeters and 6’0” in feet & inches. He maintains himself very fit and healthy with a weight of 83 in kilograms and 184 lbs in pounds.

He looks more decent with his dark brown eyes and dark brown hair. Moreover, he is very conscious about his physique and follows a regular and healthy diet in order to keep himself fit as a fiddle.

He earns from his professional career as a football career and his major income comes from contracts, salaries, bonuses, and endorsements. According to the sources, his estimated net worth is $7 million.

Will was born and raised up in Philadelphia, Pennsylvania, USA, and belongs to mixed ethnicity. He is born to his father Bill Fuller and his mother Megan Mitchell. He has four brothers named Kendall, Vincent, Corey, and Kyle who played for Frank Beamer at Virginia Tech.

As of his education, he completed his schooling at Roman Catholic High School where he started playing football. After completing his schooling, he went to Notre Dame in 2012 for his higher education.

As of his career, he was selected by The Houston Texans in the first round of the 2016 NFL Draft and signed a 4-year rookie contract worth $10.16 million. In September 2016, he made his debut against the Chicago Bear and had 5 receptions for 107 yards. On January 017, he made his postseason debut against the Oakland Raiders.

In his rookie season, he had 47 receptions for 635 yards, 196 return yards, 2 receiving touchdowns. In August 2017, he suffered a broken collarbone injury during training camp which sustained him from football for two months. In 2017, he made his debut against the Tennesse Titans with 4 passes for 35 yards and 2 touchdowns.

In the 2017 season, he did 28 receptions for 423 yards, 135 return yards, and 7 receiving touchdowns. He sustained a torn ACL injury in the 2018 season and ended the season with 32 receptions for 503 yards and 4 touchdowns. In April 2019, Texans exercised the fifth-year option on Fuller’s contract and he returned from injury during the 2019 season.

In Week 5 of the 2019 season, he marked 200+ yards in a game for the first time and finished the season with 49 receptions for 670 yards and 2 touchdowns. In 2020, his teammate DeAndre Hopkins was traded to the Arizona Cardinals and he became the number one wide receiver.

In November 2020, he received 6 games suspension for using Performance-enhancing drugs. In the 2020 season, he did 53 catches for 879 yards and 8 touchdowns.

As for his personal life, he is not married yet but he is in a romantic relationship with a beautiful girl named Anna Maria Gilbertson.

Here we are providing the list of favorites of Will Fuller: Some Interesting Facts About Will Fuller