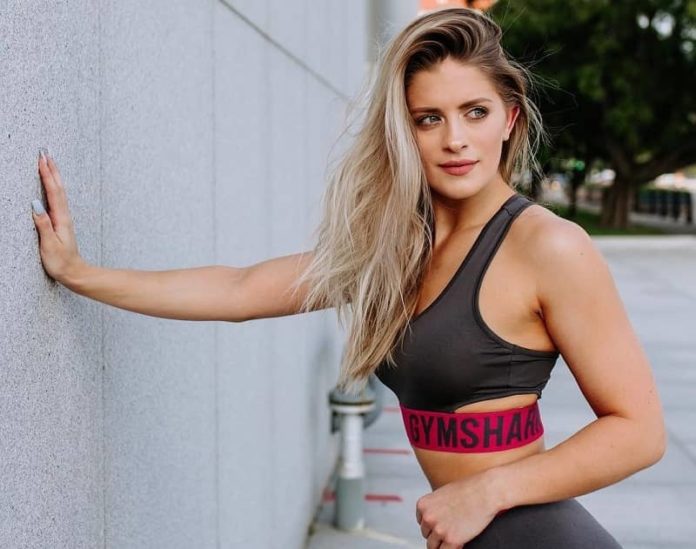 Whitney Simmons is a fitness trainer, model, YouTuber, and social media influencer from the United States. She is well known for her self-titled Youtube channel, which she uses to share fitness, health, diet, and tutorials. She’s also recognized for posting her sultry, gorgeous, and captivating modeling photographs on Instagram.

Whitney Simmons is 29 years old. She stands 5′ 6′′ tall and weighs around 58 kilograms. Her beauty is enhanced by her hazel eyes and blonde hair. She is very conscious about her health and maintains her figure with the measurement of 32 inches breast, 28 inches waist, and 34 inches hips.

Whitney Simmons’ net worth is expected to reach more than $1.5 million in 2021. Fitness coaching, modeling, commercials, brand advertisements, and vlogging are some of her sources of income.

Whitney grew up with her parents and brothers in Fresno, California. As of now, there is no reliable information on Whitney’s parents. Despite what we learn, she has three brothers named Austin, Slade, and Deacon, as well as a sister named E Claire Simmons.

She graduated from a local high school and then transferred to a university to finish her bachelor’s degree. She discovered her affinity for modeling and fitness while in high school. She dropped out of college in her second year and went on to work as a fitness trainer and model.

Whitney began her career as a fitness trainer and model in 2015, after starting a self-titled Youtube channel. In 2016, she released her first video, 5 recommendations to reach your 2016 FITNESS GOALS!, which has received over 156k views to date.

She gradually gained popularity on YouTube by posting videos about fashion, fitness, workouts, diets, challenges, lifestyle videos, and trip vlogs. Whitney currently has over 2.06 million subscribers on her YouTube account. “Grow And Define Your BOOTY And LEGS | FULL Workout” is her most popular video on her channel, with over 3.5 million views.

Whitney gained millions of followers on several social media sites, including Instagram and Facebook, as her profile as a fitness Youtuber grew. She has more than 3.2 million Instagram followers. As a result, she has been picked as a social media promoter for a number of fashion and sports businesses, including Gymshark, Alani Nu, and many more.

Aside from that, she has been a Gymshark Women official athlete. Whitney has introduced the Toluca Swim swimwear line. Moreover, she has appeared on the covers of several fitness magazines and newspaper pieces.

Whitney has been engaged to Stefan, her long-time partner. Both of them use various social media sites to post their love images and videos.

Here we are providing the list of favorites of Whitney Simmons: Some Interesting Facts About Whitney Simmons