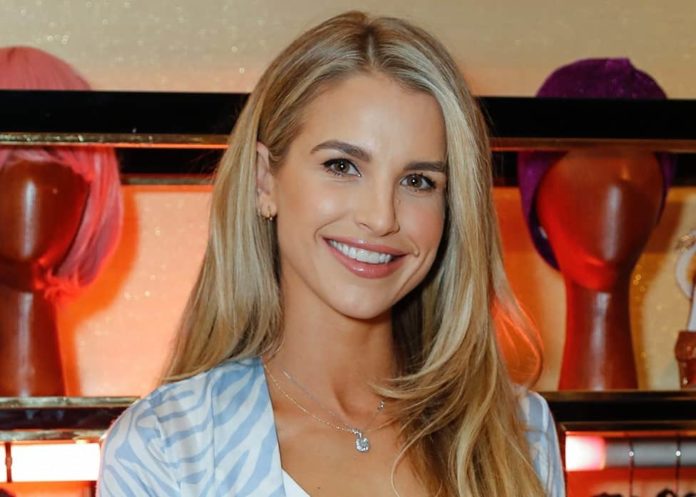 Success takes an investment of hard work, dedication, and consistency, this line has been very well proved by Vogue Williams who is a versatile Irish model and media personality. Moreover, she rose to huge fame after participating in “Dancing with the Stars” and “Stepping Out” and by winning the 2015 series of “Bear Grylls: Mission Survive”.

Recently, Vogue came into the limelight in November 2021 when she announced as the host of a new virtual reality show called Send Nudes, about peoples’ decisions to have plastic surgery.

Born on 2nd October 1985, this gorgeous model has turned 37 years old. Vogue is blessed with a good height of 179 Centimetres and is 5’10.5” in Feet & Inches. Her dark brown eyes and shiny blonde hair enhance the charm of her beauty.

She is very conscious about her physique and follows a regular diet to keep herself fit with a weight of 66 kilograms and 145.5 lbs in pounds. Her figure measures 36 inches breast, 27 inches waist, and 37 inches hips. Her bra size is 34B while her shoe size is 8 (US).

This stunning star, Vogue earns a very decent amount of salary throughout her professional career. According to the sources, she has a net worth of between $1 million to $5 million as of 2021. With her hard work and dedication, Williams has reached great heights in her career and still has a lot more to do.

Other than this, she has done endorsement and promotional work for a number of brands including Sun Kiss Tan, Lipsy, A lingerie range by Lidl, and the Macari Beachwear Couture range.

Born and grew up in Dublin, Ireland, Vogue belongs to the Irish-white ethnicity. She is the loving and caring daughter of Sandra Williams (mother) and former car salesman Freddie Williams (father). When Vogue was just seven, her parents separated and her father died in 2010.

Moreover, she grew up with her siblings, brother Frederick and sister Amber. In fact, Williams also has two half-siblings. As for her education, Vogue attended the all-girls Santa Sabina Dominican College in Sutton.

After that, she earned a degree in construction design and management at Robert Gordon University in Aberdeen. Later, she studied quantity surveying at the Dublin Institute of Technology.

Moving towards her career, Vogue took the first step towards her career by appearing in an Irish reality TV series “Fade Street” on 11th November 2010. Later, she started her stint in the twelfth series of “Dancing with the Stars in Australia” on 15th April 2012 where she collaborated with Christopher Page.

The duo was the third couple to be eliminated from the competition on 6th May 2012. After that, in the year 2013, Vogue and Brian McFadden took part in the ITV celebrity dancing competition “Stepping Out” and they finished in second place.

Furthermore, on 4th February 2015, this stunning beauty was confirmed to be participating in the ITV reality series “Bear Grylls: Mission Survive” which started airing on 20th February 2015. In fact, she also won that show on 3rd April 2015.

Thereafter, in December 2015, Williams was seen in a celebrity episode of “Catchphrase” as well as she also appeared as a guest panelist on an episode of “Loose Women” on 21st June 2016. Apart from that, Vogue also presented her own four-part series called “Vogue Williams – On the Edge”.

Later, she took part in the fourth series of “The Jump” on Channel 4 in February 2017 but pulled out due to an injury sustained whilst training. In fact, she wrote an opinion piece for the “Sunday World” entitled “Internment camps are a grim necessity” on 4th June 2017 in the wake of terrorist attacks in Manchester and London. Besides this, in the year 2020, she became the new host of Sunday Breakfast on Heart FM.

Talking about her relationship status, Vogue is a married woman. She tied the sacred knot of marriage with reality TV star Spencer Matthews on 9th June 2018. Moreover, the couple got engaged in January 2018.

Besides this, the duo also has a son born on 5th September 2018 and a daughter born on 22nd July 2020. Recently, she announced in November 2021 that, she is pregnant with their third child.

Other than this, previously, Williams got married to a former Westlife singer Brian McFadden on 2nd September 2012 in Florence, Italy. However, their relationship couldn’t last long and came to an end in the year 2017.

Here we are providing the list of favorites of Vogue Williams: Some Interesting Facts About Vogue Williams