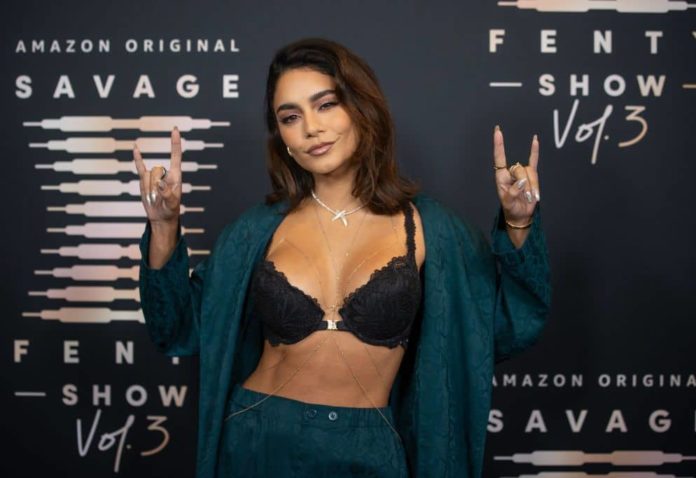 An American actress Vanessa Hudgens is well known for portraying the role of ‘Gabriella Montez’ in the popular ‘High School Musical’ trilogy. Throughout her childhood, she has been traveling to different countries and places that made it difficult for her to receive standard education at school.

She has inherited the melodious voice and music skills from her grandparents who have also inspired her to sing and perform in musical theatres from a very young age. After exploring the musical niche, she wanted to step towards acting and gave auditions for commercials and TV shows.

To date, she has worked in many movies and TV shows alongside some of the major stars of the industry. Along with professional singing, she has simultaneously focused on an acting career. Apart from glamour, she also contributes her efforts towards many charitable activities. Just like other young celebrities, she’s had her share of controversies.

Vanessa Hudgens weighs 50 kg and 110 lbs in pounds. She is an adorable actress who has a height of 154 cm or in feet inches 5’1” tall. She has silky and straight black color hair and sparkling wide brown color eyes.

She has a slim physique with a figure measurement is 33 inches breast, 24 inches waist, and 34 inches hips approximately. She will turn 33 years old in December 2021. Her bra size is 34B where as her dress size is 2 and her shoe size is 5 (US).

According to the sources, the estimated net worth of Vanessa Hudgens is $14 million USD approximately.

Vanessa Hudgens was born on December 14, 1988, as Vanessa Anne Hudgens on December 14, 1988. She is a native of Salinas, California, USA whereas her mother is from Manila, Philippines. Her father Gregory of Native American descent worked as a firefighter and her mother Gina did multiple jobs to support the family.

She was raised as Roman Catholic along with her younger sister named Stella, who is also an actor. Both the sisters attended ‘Orange County High School of the Arts’ until seventh grade and later was homeschooled. At the age of 8, she started practicing singing in local plays. Her family moved to LA when she got selected for one of the TV commercials.

In 2002, Vanessa Hudgens had made her TV debut, with a brief appearance on the ‘CBS’ sitcom ‘Still Standing.’ In the following year, she made her film debut ‘Thirteen’ which received positive reviews. She had received her major breakthrough from ‘High School Musical’ where she showed both her acting and singing skills.

It became the second most-watched movie in the US and UK and also its soundtrack peaked at number one on the ‘Billboard Hot 200’ list. In 2006, she has signed a contract with ‘Hollywood Records’ and released her debut album titled ‘V.’

In 2007, ‘High School Musical 2’ was released, and won the ‘So Hot Right Now’ award at the ‘Nickelodeon Australian Kids’ Choice Awards.’ The film ‘High School Musical 3’ was also a huge hit. She was featured in a theater production musical titled ‘Rent,’ directed by Neil Patrick Harris.

She was cast in ‘Journey 2: The Mysterious Island’ alongside Dwayne Johnson and Josh Hutcherson. She had shared the screen with actors like Selena Gomez, James Franco, and Ashley Benson for the film ‘Spring Breakers’. The storyline of the movie was based on drug use, sexual escapades, and violence amongst teenagers. She became the judge of “So You Think You Can Dance” season 14.

Here we are providing you with a list of Vanessa Hudgens’s favorite things. Some Interesting Facts About Vanessa Hudgens