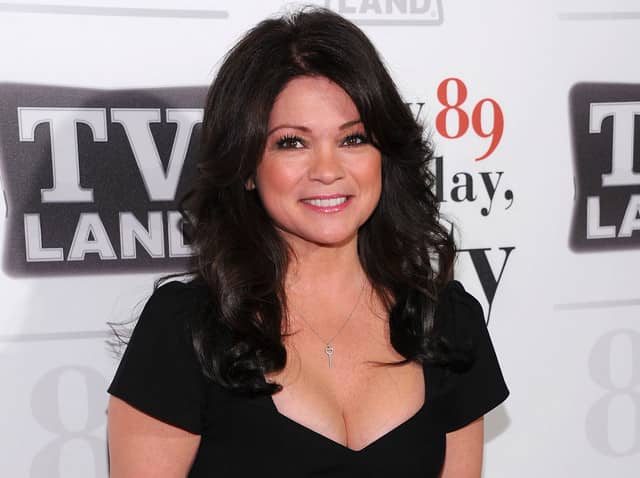 Some people are famous for their marriage and affairs with celebrities, but Valerie Anne Bertinelli is not one of them. Even though she has been associated with many big names in the industry, the two time Golden Globe Award-winning star Valerie is an American actress and author.

With her roles as Melanie Moretti on Hot in Cleveland and as Barbara on CBS’s ‘One Day at a Time’, she became the household name. Becoming a most sought after TV personality she created a niche for herself with her good acting skills and her confident poise. Post her life of drug abuse she had to work hard to reclaim her life and emerge as a winner.

Born on 23rd April 1960, Valerie will turn 62 years old. Even at this age she appears fit and healthy and her body figure measurements are 34-29-37, she wears no. 6 in the shoe size. Valerie is 5′ 4″ in feet tall and her weight measures 62 Kg approximately. She still has a gorgeous smile complemented by her Blue eyes and Dark Brown hair.

Valerie has worked as an actress for a long period of time and has been a household name. As it is known that Hollywood stars earn a huge amount of money, Valerie has also earned a lot of money through her acting ventures in films and television. The total net worth estimated for Valerie Bertinelli is $20 million USD as of now.

Valerie was born and brought up in Wilmington, Delaware, USA and she is a daughter of Andrew Bertinelli her father, a General Motors executive and her mother Nancy Bertinelli. She grew up in a Roman Catholic family with two younger brothers.

She had to move and live at a different location because of her father’s job. She lived in the Michigan Area where she attended Clarkston Middle School and later started studying acting at the Tami Lynn School of Artists.

After working in an episode of the television series ‘Apple’s Way’, Valerie Bertinelli’s acting career started in 1974. The CBS hit TV series ‘One Day at a Time’ she got her big break in 1975. In 1981 she formed her own film company and later produced multiple hit movies like ‘Silent Witness’ and ‘Shattered Vows’.

She also acted in feature films like Ordinary Heroes in 1986 and Number One with a Bulletin 1987.  For the show’s last two seasons of ‘Touched by an Angel’, she joined the cast in 2001. Valerie worked for many of Jenny Craig’s weight loss program commercials as it helped her lose weight. Who Do You Think You Are is a genealogy documentary series in which she appeared in 2014.

Valerie Bertinelli married the guitarist Eddie Van Halen in 1981 and the couple was blessed with a son in the year 1991 however their marriage ended in 2007.

Here we provide you the list of Valerie Bertinelli’s favorite things. Some Interesting Facts About Valerie Bertinelli