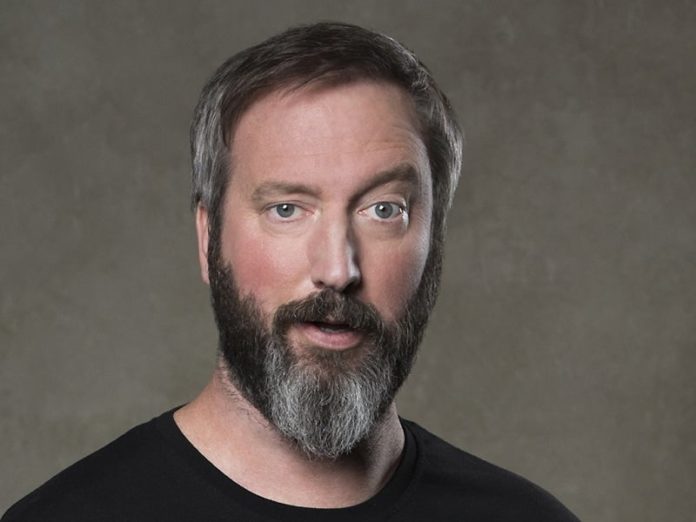 Tom Green (born Michael Thomas Green) is a Canadian actor, comedian, rapper, and filmmaker. Green began his career as a stand-up comic and is noted for his shocking humor. After starting his MTV program, The Tom Green, which aired from 1994 to 2000, he gained widespread popularity.

In 2003, he became the presenter of The New Tom Green Show. Tom Green’s House Tonight was his online chat program from 2006 through 2011. From 2013 to 2014, he presented Tom Green Live, a weekly conversation program. Green has also appeared in a number of Hollywood films, such as Road Trip and Charlie’s Angels.

Tom Green is 6 feet and 3 inches tall, with a height of 1.9 meters. He weighs 192 pounds or 87 kilograms. He is of ordinary height and physique. His eyes are blue, and his hair is a dark brown color. He will turn 51 years old.

In 2006, he was featured in a number of advertisements for the Canadian Cable Public Affairs Channel.  To summarize, his comic profession provides the majority of his income. His estimated net worth is $5 million.

His hometown is Pembroke, Ontario, Canada, where he was born. He is a citizen of Canada. He also has US citizenship, which he attained in February of this year. Richard Green, his father, and Mary Jane, his mother, were his parents.

Joe, his younger brother, is his only sibling. He went to Henry Munro Middle School, Colonel, and Cairine Wilson Secondary School for his studies. He went to Algonquin College after high school and earned a bachelor’s degree in television broadcasting in 1994.

At the age of 15, Tom Green began his career as a stand-up comedian. He began doing stand-up comedy at local bars such as Yuk Yuk’s Comedy Club. He conducted a night-time call-in show on CHUO, the campus radio station of the University of Ottawa. The Rap Program was the name of the show.

From 1993 to 1996, he co-hosted The Midnight Caller Show with Glenn Humplik. In 1994, he launched his own television program, The Tom Green Show. It was on the air from 1994 until 2000. After MTV snatched him up in 1999, he gained national prominence. He was well-known for his outlandish sense of humor.

His most famous skits include pretending to “hump” a dead moose (as referenced by rapper Eminem in “The Real Slim Shady”), having an X-rated lesbian scene painted on his father’s car (dubbed the “Slut Mobile”), drinking milk by sucking on a cow’s teat, and sleeping with a cow head in his parents’ bed because his father was a fan of The Godfather movies.

In 2002, he founded his own production firm, Bob Green Films. In 2003, he appeared as a guest host on The Late Show with David Letterman. In 2003, he launched his own late-night MTV discussion program, The New Tom Green Show. Due to poor ratings, it was subsequently discontinued.

In 2006, he began his online chat program, Tom Green’s House Tonight, from his living room. The program aired from 2005 through 2011. In 2008, he presented Go For The Green, an environmental game program on Discovery Planet Green. He has appeared as a celebrity participant on the ABC reality game program Wanna Bet? on multiple occasions.

In 2009, he appeared on The Celebrity Apprentice. He was a judge on the dating program For the Love of Ray J for the first two seasons. In 2015, he began broadcasting live from a studio in Los Angeles through his YouTube channel’s live streaming service. In 2013, he created the audio program Tom Green Radio for his website.

It was available for purchase on iTunes and at tomgreen.com. From 2013 to 2014, he presented the weekly conversation program Tom Green Live on AXS TV. Green, in addition to hosting comedy programs, is also an actress who has been in a number of films.

He has appeared in a number of Hollywood films, including Road Trip, Charlie’s Angels, Freddy Got Fingered, Stealing Harvard, and Shred. The film Freddy Got Fingered, written and directed by Green, earned five Golden Rasberry Awards in 2001. He became the award’s first performance in its twenty-year existence.

Prankster is an indie film that he wrote, directed, and starred in. He received a number of Stinkers Bad Movie Awards for Worst Actor. In October 2004, he published his book, Hollywood Causes Cancer: The Tom Green Story. The book details his Hollywood career, his brief marriage to Drew Barrymore, and his battle with testicular cancer. He contributes to The Huffington Post with pieces.

Tom Green has only been married once. He was married to Drew Barrymore, an actress. They were married from July 2001 to October 2002, when they divorced. He is not the father of any children. In the early 2010s, he dated actress Kimberly Burke. Later, he was romantically related to a number of celebrities.

Here we are providing the list of favorites of Tom Green: Some Interesting Facts About Tom Green