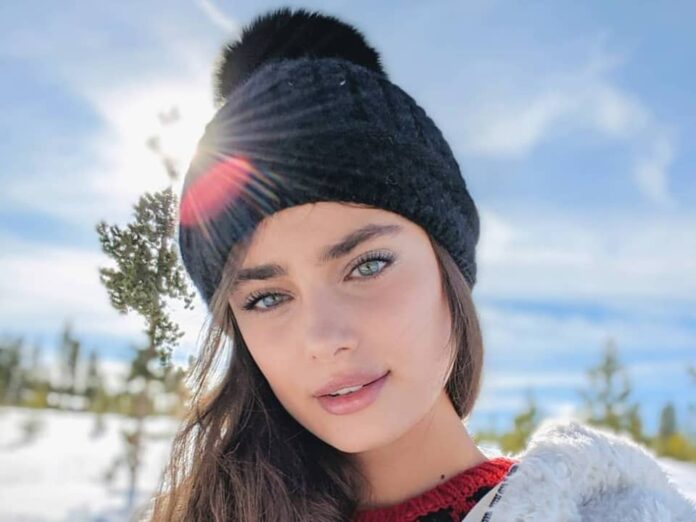 Discovered by chance and became famous as a Victoria’s Secret Angel at the young age of 19, Taylor Marie Hill is an American fashion model. Although it took some effort to get her to go to Los Angeles for a photoshoot fortune of the quiet country girl took a turn once she was discovered.

Appeared on almost all glamour magazines, today he is a leading model with top international brands. As she has a huge following on social media, her endorsements are highly sought after. She has even walked the ramp for various shows and acted in a few films.

Born in Palatine, Illinois, and brought up in Colorado, Taylor Marie Hill has turned 26 years old. She appears to be tall and has a well-maintained body figure. Her body figure measurements are 33-23-34 and she wears no. 8 in the shoe size. Her height measures 5’ 9” in feet and her weight is 55 kg approximately. Taylor’s eyes are of Green color and the color of her hair is Dark Brown.

Models are known to earn a lot of wealth and being a model for the brand like Victoria’s Secret, is considered a big achievement. Taylor Marie Hill has earned most of her net worth from her career as a professional model.

She lives a luxurious life and is signed with the topmost modeling agency. The total net worth estimated for Taylor Marie Hill is estimated to be $8 million US dollars as of now.

Taylor Marie Hill was born and brought up in Palatine, Illinois, U.S. She is the daughter of David Hill, her father and Jennifer Hill, her mother who used to be an actress. She was raised along with three siblings, an older sister, and a younger brother and a sister.

Taylor studied at her local Pomona High School and after graduating from there, did not opt for further education as she wanted to continue with her modeling career.

At a barn in Granby, Colorado, where she grew up, photographer and modeling agent, Jim Jordan discovered Taylor and paved her way to the modeling career. She was featured on the print campaign for the American fast fashion retailer ‘Forever 21’ as well as Italian clothing label Intimissimi’s catalog.

She was offered the role of Jessica in the short film ‘Hollywood Temptations’ in the year 2013, which made her entry into the world of glamour a grand success. She walked the ramp for the famous ‘Victoria’s Secret Fashion Show’ and modeled for ‘H& M’ in the year 2014.

In Forbes’ list of ‘The World’s Top-Earning Models’ she made her debut as number 17 in 2016. Bazaar, Elle, Madame Figaro, and Vogue are some of the top glamour magazines on which she has appeared. IMG Models, Ford Models, No Ties Management, and White Cross Management are some of the topmost modeling agencies with whom she has been associated till now.

Here we provide you the list of Taylor Hill’s favorite things. Some Interesting Facts About Taylor Hill