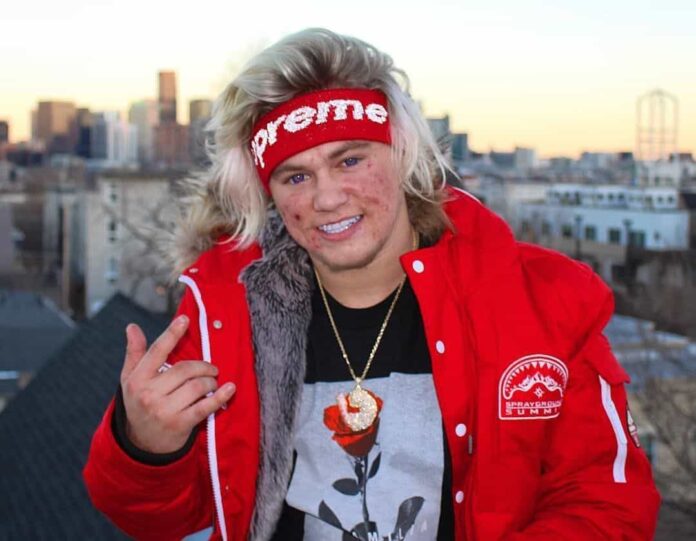 Known for his dangerous and of obnoxious stunts and pranks which have led him to the hospital several times Patrick Wallace, also known as Supreme Patty is an American prankster, social media influencer, stunt man and rapper. Because of his pranks, Supreme Patty has also been in jail a few times. Starting his career with Instagram he has over 6 million followers till now. Smoking random food items in a bomb are what he is popular for.

Supreme Patty has successfully earned the massive fan following because of his dangerous and weird pranks and is often referred to as “the modern-day Johnny Knoxville”.  He has also released several of his rap tracks on his YouTube channel. Famous collaborations with several other social media stars have contributed even more to his popularity.

Born on the 18th of December 1997, Patrick Wallace is currently 22 years old. He appears to be fit and has kept himself in a good shape even after a few accidents. His body figure measurements are 42-32-37 and his biceps measure 16 inches. Wallace’s height is 5 feet 10 inches and his weight measures 85 kg. Patrick has a set of blue colored eyes and has a unique hairstyle with long blonde colored hair.

YouTube stars and internet personalities earn a lot of money through their brand promotions and advertisements. Good and unique content can get a lot of views and a lot of subscribers which eventually attracts big brands for advertisement. Supreme Patty has earned most of his wealth through his YouTube career and has released a few rap tracks as well. The total net worth estimated for him is $750,000 US dollars as of now.

The native of Florida Patrick Wallace was born in raised in Dayton beach, Florida, USA. He is the son of Bill Wallace and Angie Wallace and grew up with his sister Katie Wallace. He has studied at his local High school and did not pursue any further education after that.

In 2013, Supreme created his ‘Instagram’ account and ventured into the social-media arena after he uploaded the first picture on August 29, 2013. Through an online name-generator, the online pseudonym, “Supreme Patty,” was created. He began by making ‘Vine’ videos and he eating three hot dogs in less than 5 seconds was his first ‘Vine’ that became viral.

Actor Orlando Bloom later “reVined” the video and Supreme earned a massive fan base overnight. popular for his dangerous and obnoxious pranks is how he built up his image. For starting a riot at a FaZe Bank and Fatboy SSE pop-up shop, he was once arrested as well. In April 2015, Supreme created a ‘YouTube’ channel and named it ‘Supreme Patty TV’.

Supreme is an upcoming rapper apart from his popularity as a social-media prankster. In collaboration with music producer A. Millz, he has published music on ‘SoundCloud’. Viewed by over a million people, ‘I GOT ALL MY ACNE REMOVED!!’ is another popular video on Supreme’s channel.

Supreme trades his signature clothing and accessories on his website. Supreme was rumored to be dead due to a disease called Ligma but later his followers found out that there is no such disease known in the medical world.

Talking about his dating life, Supreme is currently dating his girlfriend Katie Marie.

Here we provide you the list of Supreme Patty’s favorite things. Some Interesting Facts About Supreme Patty