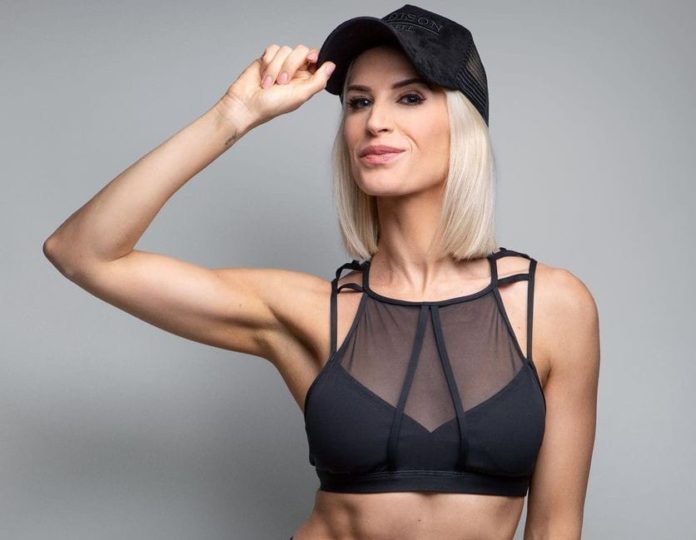 Successful celebrities are not gifted, they just work hard and then succeed on purpose, this line has been very well proved by Sarah Jayne Dunn who is an English actress. Moreover, she is well-known for portraying the role of Mandy Richardson on the Channel 4 soap opera, “Hollyoaks”.

In fact, Sarah also won the British Soap Awards in the category of ‘Most Spectacular Scene of the Year’ alongside David Brown in 2002 for her performance in Hollyoaks. Recently, Dunn came into the limelight in November 2021 when she was dropped from Hollyoaks after she joined the adult subscription service OnlyFans.

Being an actress, she is very conscious about her physique and figure and takes care of her weight which is 57 kilograms and 126 lbs in pounds. She has a beautiful doll-like face which is complemented by her blue eyes and blonde hair.

With this beautiful personality, Sarah has quite good earnings from her professional career as an actress. Having started her career with her role as Mandy in “Hollyoaks”, she has managed to come a long way up earning a healthy amount and huge fame. According to the sources, her estimated net worth is $1.5 million approximately.

Born and growing up in Leigh, Greater Manchester, England, Sarah belongs to the White ethnicity. However, she is quite private about her personal life so she never revealed any information about her parents and siblings.

As for her education, Sarah attended Lowton High School where she excelled in drama and performing arts. Moreover, while growing up, she was influenced by the 1980s actresses and models that she developed an interest to become an actress.

Moving towards her career, Sarah took the first step towards her professional career in the year 1996 by making her debut with the soap opera, “Hollyoaks”. Moreover, she served the role of Mandy Richardson on the show at age of 14. Besides this, she was a part of the show for almost a decade until she left the show as a cast regular in 2006.

Since then, Sarah has returned to the show five times. Furthermore, in the year 2003, she played a supporting role in the Brookside DVD spin-off, “Unfinished Business”. This gorgeous star has also got appeared on the BBC One series, “The Innocence Project”, “Drop Dead Gorgeous” and “It’s Adam and Shelley” in 2007.

In the same year, she got the lead roles in the short films, “Betting in Bars” and “Northern Cowboys”. Apart from that, she has also made her crucial appearance in nine episodes of BBC One’s medical soap opera, “Doctors”. Other than this, Sarah also got a brief role in the 2008 film, “The Dark Knight”.

She made an appearance on “Ready Steady Cook” in January 2010 alongside Helen Noble. Besides this, she got appeared in the former reality show, “Famous and Fearless” in the year 2011. In the same year, she also played the role of Victoria in a film, “Death”. In addition to this, Sarah played international charity worker Taylor Ashby in the BBC One medical drama, “Casualty” in the year 2014.

Apart from that, this stunning beauty made a theatre debut with the role of Gloria in a UK regional tour of the comedy play, “Boeing, Boeing”. Later, in the year 2010, she played Sally in the UK regional theatre tour of “When Harry Met Sally…”.

Besides this, it was also announced in September 2007 that Sarah would be teaching students at a new acting school in Liverpool along with her former Hollyoaks colleague Helen Noble and theatre actor Graham Tudor.

Talking about her relationship status, Sarah is a married woman and has been married just once to date. She tied the sacred knot of marriage with Jon Smith who is an American personal trainer. Their marriage ceremony took place at The Holford Estate in Cheshire in 2018.

Besides this, this lovely couple has also been blessed with a son named, Stanley whom they welcomed before their marriage. In fact, Dunn has also said that “To marry in front of our son was such a special moment”.

Here we are providing the list of favorites of Sarah Jayne Dunn: