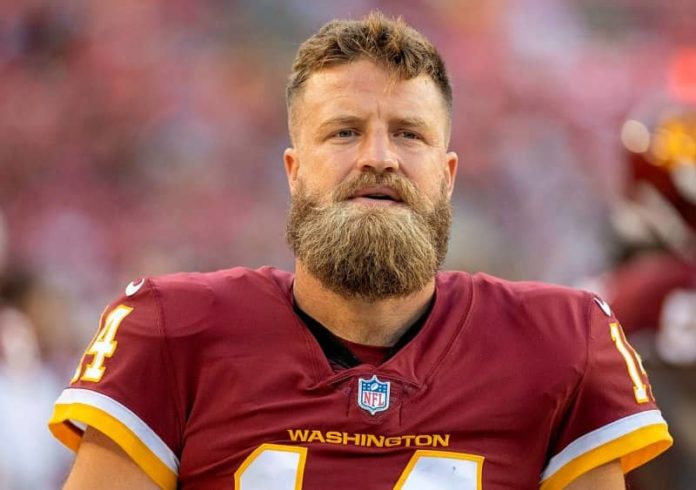 Ryan Joseph Fitzpatrick, renowned by the name of Ryan Fitzpatrick is an American football player who plays as a quarterback for the NFL team, Miami Dolphins. In the 2005 NFL Draft, The St. Louis Rams drafted him 250th overall. He is the only player in NFL history to throw a touchdown pass with eight teams.

In 2015, he was awarded the Ed Block Courage Award. Moreover, in 2004, he was named Ivy League Player of the Year. He delivered stellar performances and has the ability to fit in any team. He is considered one of the most respected players in the NFL.

Ryan was born and raised up in Gilbert, Arizona, United States and belongs to white Caucasian ethnicity. He didn’t reveal any information with regards to his parents including their names too. He has been grown up with his three brothers named Brandon Fitzpatrick, Jason Fitzpatrick, and Shaun Fitzpatrick.

As of his career, he entered the 2005 NFL Draft and was selected by St. Louis Rams in the seventh round. On 18 July 2005, he signed a 3-year rookie contract worth $953,000 with the Rams and began his rookie season as the third-string quarterback. On 27 November 2005, he made his professional regular-season debut against the Houston Texans.

He replace injured veteran Jamie Martin as a substitute. Ryan completed his rookie season with 76 pass completions of 135 pass attempts and eight interceptions in four games with three starts. In the 2006 season, he appeared only in one game. In September 2007, he was traded to the Cincinnati Bengals for a seventh-round pick.

On 18 October 2009, he made his debut for the Bills against the New York Jets and finished the season with 9 touchdowns,10 interceptions, and 1,422 passing yards. In the 2010 season, he recorded at least one touchdown pass in 13 consecutive games.

In March 2015, he was traded to the New York Jets for a late-round conditional draft pick. On 13 September 2015, he made his first start for the Jets against the Cleveland Browns. He finished his 2015 season with 3,905 yards with 31 touchdowns and 15 interceptions. After the 2015 season, he became a free agent.

He started in all 16 games of the 2019 season and threw 3529 yards with 20 touchdowns and 13 interceptions. In 2019, he was named Miami Dolphins team MVP and in the 2020 season played as starting quarterback for Dolphins. Some Interesting Facts About Ryan Fitzpatrick