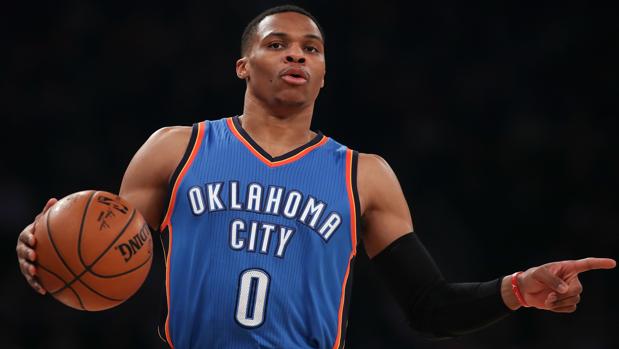 MVP, Mr. Triple-Double, clutch, Mr. Intensity, fashionista, and stat-padder are some of the well-known names the fans use to address the Basketball giant Russell Westbrook. To average a triple-double for an entire season since 1962 was almost unimaginable for someone but Russell proved everyone wrong, accomplishing it thrice from 2016 to 2019.

Russell has come a long way from winning the biggest honors while playing in college to becoming one of the most prominent ‘NBA’ stars. He also continues to display his interest in the fashion world and is known to be a successful fashion designer.

Born on 12th November 1988, Russell is currently 34 years old. As one of the prominent players of the game, Russell works hard on his fitness and physique as such demanded by his sport. Russell’s chest measures 42 inches, waist 32 inches, and biceps are 16 inches.

He weighs 91 kg and his height is 6’ 3” which gives him a distinct advantage. Russell has Light Brown hair and Dark Brown eyes.

Their net worth which is a result of his hard work and smart decisions is estimated to be $125 million for Russell Westbrook. With most of his revenue coming from playing basketball, fashion Design interests, entrepreneurial efforts, and ad endorsements being his other sources of income, his estimated current salary is $38.5 million.

Born in Long Beach, California, Russell grew up in South Central Los Angeles. He learned to play basketball from his dad while growing up with his younger brother Raynard. Westbrook eventually became an honor student because his parents Russell Sr. and his mom Shannon Horton made sure he focused on academics. Russell attended ‘Leuzinger High School.

His explosive game helped Russell well throughout his ‘UCLA’ career and gave him the opportunity of a big break in 2008, after becoming the fourth overall pick in the ‘NBA’ draft. Russell Westbrook showed a glimpse of his talent in 2009 with an average of 16.1 points per game after being drafted by Oklahoma.

He played a big role in helping his team reach the finals in the 2011 ‘Western Conference Tournament’ and with an average of 23.2 points Westbrook ended the 2012-2013 seasons. He missed the first two games of the 2013-14 season due to a knee injury but made a comeback soon after.

By scoring 48 points Westbrook broke his previous career-high record of 45 points in 2015, in a match against ‘New Orleans Pelicans’. He became the first player in the ‘NBA’ history to achieve three career 50 point triple-doubles in 2017. During the 2010 ‘FIBA Championship,’ Russell was a part of the American basketball team but turned down the offer to represent his team at the 2016 ‘Olympics’.

Westbrook married his long-time girlfriend Nina Earl in 2015 and the couple is blessed with a son and twin daughters.

Here we provide you the list of Russell Westbrook’s favourite things. Some Interesting Facts About Russell Westbrook