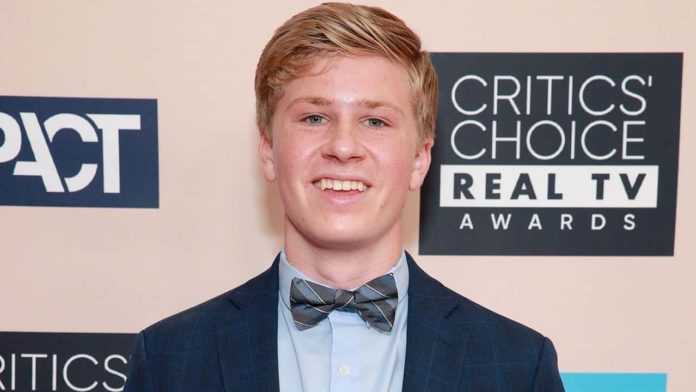 Like father like son. The phrase is nothing but the truth for Steve Irwin’s son Robert Irwin. Looking after the family zoo post-Steve’s death, Robert brings an abundance of energy with his love of nature. He also enjoys wildlife photography, feeding crocodiles and learning about the world around him.

He hosts a program on his family’s zoo’s internal TV network called Robert’s Real Life Adventures and stars on the Animal Planet series Crikey! It’s the Irwins. Apart from being a TV star, Social media star, a photographer and a zookeeper, Robert is also an author and has published his own book.

Born on December 01st, 2003, Robert Irwin is currently 16 years old, still growing up, currently, Roberts’s height measures 5’5” in feet and he weighs 68 kg. Robert does appear tall and slim. His eyes are blue in color and the color of his hair is naturally blonde.

Robert started to look after the family zoo with his mother and sister, after his father’s death. His overall wealth comes from earnings through the family zoo, his appearance as a television star, his book publication as well as photography. Roberts’s current net worth at the very young age of 16 is estimated to be $3 million dollars.

Robert Clarence Irwin is the son of world-famous Crocodile Hunter Steve Irwin, his father and Terri Raines-Irwin, his mother and the grandson of the naturalist and animal conservationist Robert “Bob” Irwin.

Born in Buderim, Queensland, Australia, Robert grew up with his sister Bindi Irwin. Robert and his sister Bindi were homeschooled at Australia Zoo. Robert currently looking after the family zoo has not revealed any plans about his further education.

Robert is mostly known for his TV appearances, starting in 2009, he had a cameo appearance in Free Willy: Escape from Pirate’s Cove. He later appeared alongside his mother and sister in a TV series titled Steve Irwin’s Wildlife Warriors in 2012.

Robert Irwin co-hosted a TV series named Wild but True on Discovery Kids Channel in 2014 and 2015. In a British wildlife series Ten Deadliest Snakes, he appeared as a guest in 2015. Irwin made his late-night television debut on 16 February 2017 after he appeared on The Tonight Show with Jimmy Fallon.

Robert Irwin has appeared on the show more than ten times as of now. Robert, the leading contributor to the Australia Zoo Crikey magazine, has embarked upon many expeditions related to photography around the world. His responsibility as a member and ambassador of Scouts Australia is to encourage Australia’s young people to be involved with wilderness and conservation.

Here we provide you the list of Robert Irwin’s favourite things. Some Interesting Facts About Robert Irwin