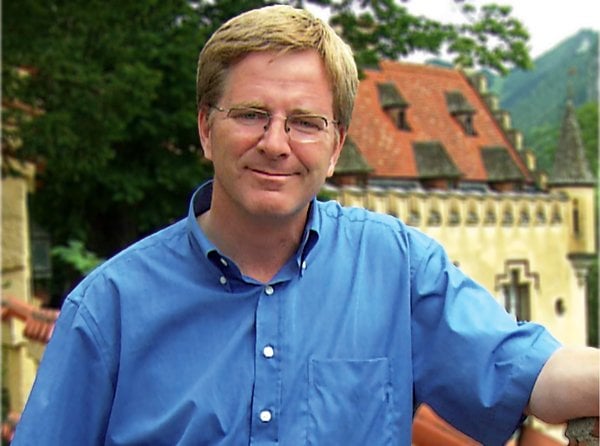 Everything will fall in place if you follow your passion and Rick Steves is the person who has proved it all right. Talking about mixing passion and ambition Rick has too much on his plate. He is a popular television personality and author who has gained popularity after his work as a host on the travel radio show and also by being a well-known author.

Rick’s travel philosophy has encouraged many to explore new destinations and become immersed in the local people’s way of life. Rick Steves’ Europe is the show he currently hosts, writes and produces.

Rick steves, was born on 10 May 1955, Rick Steves is 67 years old currently. Rick is the host of the public TV show and therefore believes in staying fit and presentable. He appears quite tall with a height of 6’ 0” feet and weighs 80 kg approximately.

Rick has radiant Dark Blue eyes which enhance his looks and personality as a TV host and his hair is naturally blonde which is turning white probably due to aging.

To date, Rick has released several books about European countries and adventures that are sold across the world and he makes a significant amount of worth from the books he authored.

He also earns extra income from his TV shows, which helps to increase his net value. The multifaceted Rick Steves has an estimated net worth of $10 million after making money through various sources over the years.

Rick Steves was born in Barstow, California, and currently resides in Edmonds. Rick is the son of Dick Steves, a high school band director, and piano technician and his mother June Erna Steves was a homemaker. At the age of 20, Steves started teaching travel classes and attended The Experimental College which was a student-run program of non-credit classes.

In 1978 Steves enrolled at the University of Washington and earned a bachelor’s degree in European history and Business Administration as his major. It was traveling which made him happy, and hence he also worked as a travel guide and also as a piano teacher.

An activist, author, host of his radio show and a famous television personality Rick Steves can surely multitask. Rick is a man all about traveling and lifestyle. He started working as a travel guide during summers and also taught travel classes. A show called Travel with Rick Steves is the radio show he currently hosts.

As an author, he started publishing travel guides and became a star when his book called ‘Europe through the Back Door’ was published. Rick traveling through Europe, visits villages and towns and covers the stores in his books and guides. Working as an activist, Rick constructed a 24 unit apartment for homeless mothers and children.

He also has his very own website which is about travel and television. His show Rick Steves’ Europe launched in September 2000 airs a season every year. From 1991 to 1998 he also ran a TV show ‘Travels in Europe with Steves’ which increased his popularity.

Rick was married to Anne Steves and divorced in 2010. He has a son Andy Steves and a daughter Jackie Steves.

Here we provide you the list of Rick Steve’s favourite things. Some Interesting Facts About Rick Steve