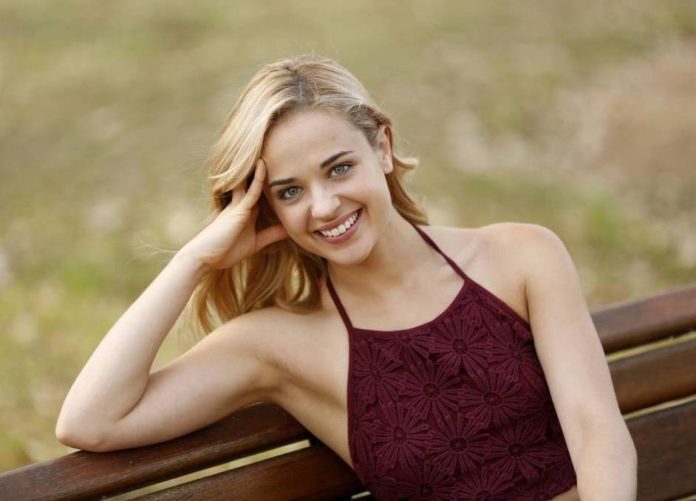 Nothing is impossible, the word itself says that I am possible, this line is very well proved by RaechelleBanno who is best known as a gorgeous actress, dancer, writer, and model. Moreover, she has won the heart of millions of people for portraying Ruby Landry in 4 tv movies tailored from V. C. Andrews’ Landry novels.

Born on 28 April 1993, this talented personality turned 29 years old. This diva has a good height of 160 Centimetres and 5’3” in Feet & Inches. Her green eyes and shiny blonde hair enhance her beauty. She seems fit with a weight of 55 in kilograms and 121 lbs in pounds.

This gorgeous, Multi-talented actress and model, Banno has accumulated a decent amount of net worth throughout her career. Her major source of income is her acting career while she is also earning a handsome amount of money through dancing, writing, and modeling career.

From her career’s earnings, she is living a lavish and luxurious lifestyle. According to the sources, Raechelle’s estimated net worth is $1 million to $5 million approximately.

Born and grew up in    Sydney, New South Wales, Australia, Banno belongs to the Australian-White ethnicity. She is the loving daughter of Joanne Banno (mother) while there is no information about her father.

Talking about her school education, she enrolled at the Fairfield West Public School and then the Fairvale High School, a government-funded secondary school. Moreover, she has also taken acting courses from the National Institute of Dramatic Art (NIDA), Australia’s leading center for education and training in the performing arts.

Moving towards her career, Banno started modeling at the age of nine by appearing in various television commercials and short films. Moreover, she started dancing at the age of three. As a model, she made her appearance for the Australian counterpart of British Boden’s subsidiary Mini Boden, Little Romeo, King Cow, Barbie, and Total Girl magazine.

Apart from that, her acting career started in 2002, when she made her TV debut in an episode of the 7Two children’s drama series “In Your Dreams”. Later in 2014, she has also appeared in the pilot episode of “Karralak”. She then made her appearance in the Australian soap opera “Home and Away” in the year 2015 until 2018.

In the year 2016, She appeared in short films, including “Second Best” and “Phenomena”. Likewise in the year 2019, she played Atria Nine in the first season of the sci-fi action series “Pandora”. Other than this, she has also voiced three characters in the ABC ME animated series “100% Wolf: Legend of the Moonstone”.

Furthermore, in 2020 she also co-directed the short film, “@Bladeroller: Case Unsolved” with her sister, Karina. As of 2021, she is going to portray ‘Ruby Landry’ in four television films adapted from V. C. Andrews’ Landry novels. “Ruby”, “Pearl in the Mist”, “Hidden Jewel” and “All That Glitters” will be broadcast across two consecutive weekends from 20th March 2021.

Currently, Raechelle is unmarried and assumes to be single at present. She never disclosed any information about her relationship status. However, she was also rumored to be dating Scott Lee and Henry Wells. But, their reports were never confirmed.

Here we are providing the list of favorites of Raechelle Banno:

Some Interesting Facts About Raechelle Banno