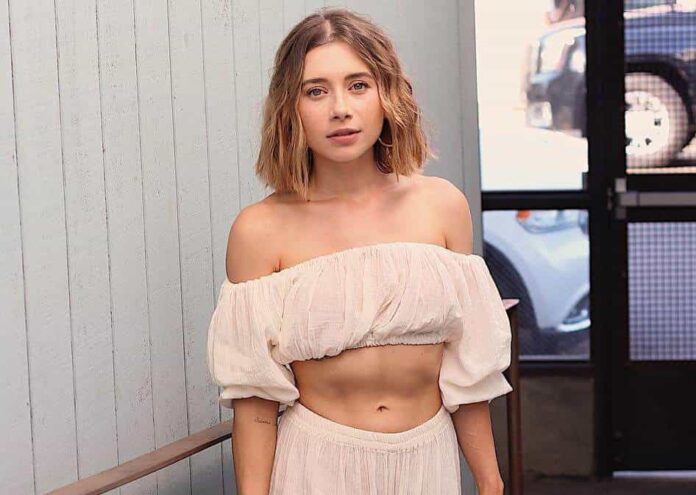 A Russian born actress Olesya Rulin is best known for her supporting role of Kelsey Nelson in the three parts of Disney’s commercially successful ‘High School Musical’ franchise. Apart from this musical-drama, she is also associated with other Disney Channel Original Movies, such as ‘Hounded, ‘The Poof Point’, and ‘Halloweentown High’.

Her other movies are ‘Urban Legends: Bloody Mary’, ‘Vampire Chicks with Chainsaws’ and ‘Flying By’, and feature films like ‘Mobsters and Mormons’, ‘American Pastime’, ‘Forever Strong’, ‘Private Valentine: Blonde & Dangerous’ and ‘Expecting Mary’. In 2011, she also appeared in the lead role in the psychological drama film ‘Apart’.

Since her first appearance on television in Disney Original Movies, she has also made guest appearances on a number of television series like ‘Touched by an Angel’, ‘Everwood’, ‘CSI: Miami’, ‘The Mentalist’, ‘Drop Dead Diva’, ‘Touch’, ‘Dirty Work’ and ‘The Night Shift’.

In the TV show, ‘Greek’, she was cast for a recurring role in 10 episodes, and also appeared on two episodes of the MTV comedy-drama series, ‘Underemployed’. In 2015, in the PlayStation Network series ‘Powers’ she played one of the lead characters, Calista Secor.

She has a slim body with figure measurement is 34 inches breast, 24 inches waist, and 35 inches hips approximately. She turned 36 years old. Her bra size is 32B whereas her dress size is 6 and shoe size is 7 (UK).

According to the sources, Olesya Rulin’s net worth is estimated to be $1 million approximately.

Olesya Rulin was born as Olesya Yurevna Rulinkova on March 17, 1986. Though she was born in Moscow, Russian SFSR, Soviet Union, and was raised in a small 12-house village in Likhoslavl. When she was only six years old, her family moved to the United States in search of a better future.

Along with her mother and brother and initially lived in Texas, and eventually moved to Utah. As a child, she was trained as a ballet dancer and later learned to play the piano. She attended West Jordan High School, for elementary education from where she graduated in 2005. For further studies she spent some time in Paris while pursuing a course in economics.

At the age of 12, Olesya Rulin participated in a model search contest and won representation by four talent scout agencies. In 2001, she made her debut with a minor role and appeared on made-for-television Disney Channel Original Movies like ‘Hounded’ and ‘The Poof Point’.

Later, she continued to appear on television, doing minor roles in a number of TV shows like the CBS supernatural drama series ‘Touched by an Angel’ and The WB drama series ‘Everwood’.

In 2005, she landed on a big screen and played a small part in the supernatural horror film ‘Urban Legends: Bloody Mary’, which was followed by a role in the comedy film ‘Mobsters and Mormons’. She got her big break by being cast in another Disney Channel Original Movie ‘High School Musical’. Due to her brilliant acting she got recast for the same role in the sequel High School Musical 2.

The acting as a part-time job for her as she also served as a certified nursing assistant for one year, as well as worked at various stores including Victoria’s Secret. Once she started getting more substantial roles in movies, she moved to Los Angeles to become a fulltime actress. She was a known face on television and got a recurring role in the ABC comedy-drama series, ‘Greek’ during 2009-10.

Here we are providing you the list of Olesya Rulin’s favorite things. Some Interesting Facts About Olesya Rulin