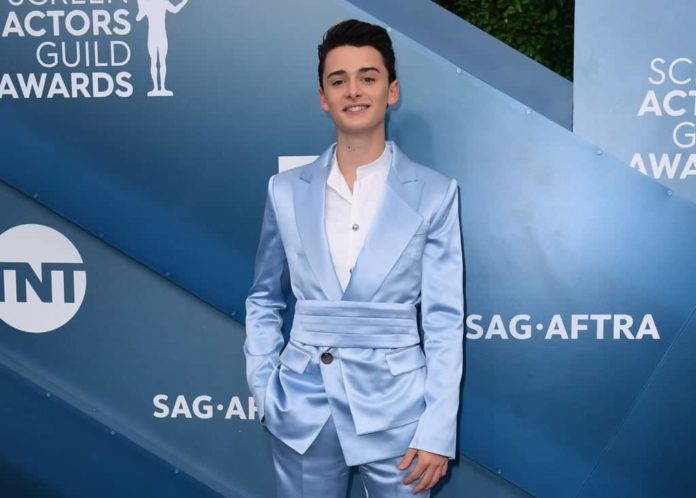 After he began to portray the lead character, Will Bryers, in the Netflix horror series, ‘Stranger Things’, Noah Schnapp, an American actor came into the limelight and became known globally. Debuting as an actor in the Steven Spielberg directed the movie, he successfully auditioned for the part of Roger Donovan’s Bridge of Spies’.

Starring in a few movies that are under production at the moment Noah Schnapp has become a star at a young age and looks to have a promising career and successful future in the Hollywood entertainment industry.

Noah Schnapp is a young kid born on October 3, 2004, who is currently 18 years of age. He appears very slim and appears tall compared to other kids of his age. His height measures 5’6“and his weight measures 62 kg.

Even at the age of 16, he has a young boyish look which is enhanced even more by his rare set of Hazel colored eyes as well as his Dark Brown color of hair.

Noah is not just a passionate actor he is a well-established and highly followed social media influencer with over 14.5 million followers on his Instagram page @noahschnapp, he also has over 700 thousand fans following him on his Twitter page.

Although most of his net worth comes from his acting career, some part of it also comes from his social media appearance. The total net worth of Noah Schnapp is estimated to be $3 million as of now.

He began performing at the age of six and demonstrated a penchant for acting right from his childhood. Noah’s education details are not yet revealed as he has been acting from quite a young age.

By landing the role of Roger Donovan in the movie, ‘Bridge of Spies’ Noah as he made his big-screen debut in the year 2015, which proved to be hugely momentous for him. Directed by Steven Spielberg, this project gave him the opportunity to share screen space with the celebrated actor ‘Tom Hanks’.

‘The Peanuts Movie’ was released in the same year in 2015 where he was picked as the voiceover for Charlie Brown in the film. In 2016 he was selected as one of the members for Netflix’s horror sci-fi series, ‘Stranger Things’ in the main cast. In 2016 (Season 1) and 2017 (Season 2), he appeared in all the episodes telecasted. He was featured alongside Winona Ryder, David Harbor, and Finn Wolfhard in the lead cast.

Lending his voice to Jay in ‘The Angry Birds Movie’ he once again served as a voice actor in 2016. He was also cast in the music video of the song, “LA Devotee” and featured in the short film, ‘The Circle’ (2016). He has also played important roles in the movies ‘Intensive Care’ (2018) and ‘Abe’ (2018) also in the Otis Copeland movie, ‘We Only Know So Much’.

Here we provide you the list of Noah Schnapp’s favourite things. Some Interesting Facts About Noah Schnapp