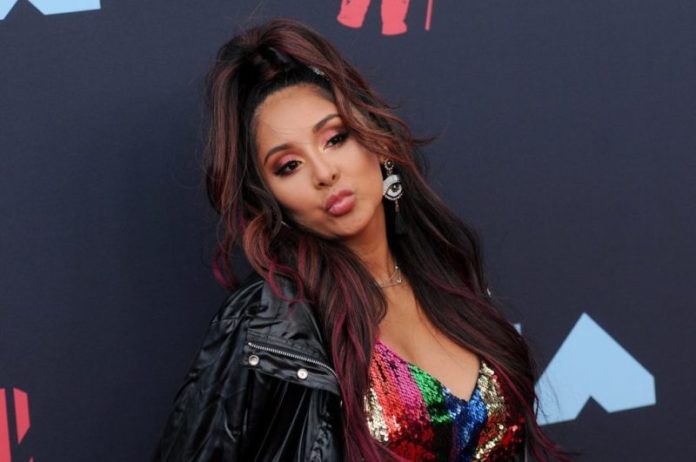 She got huge recognition after being cast as one of the members of the MTV reality show, “Jersey Shore”. She gained huge fame and gathered public recognition starring in several shows including “Jersey Shore: Family Vacation” and “Snooki & Jwoww”.

Moreover, she is featured in numerous web and television series, has hosted shows and talk show appearances. She was even awarded the WWE 2011 A-Lister of the Year Slammy Award.

Her beauty is enhanced by her dark brown eyes and black hair. She is very conscious about her health and maintains her figure with the measurement of 35 inches breast, 25 inches waist, and 32 inches hips. Her bra size is 35B while her dress size is 4 (US).

She has quite good earnings from her professional career as a real personality and has a healthy net worth estimated to be around $4.5 million. At Rutgers University, she was paid $32,000 to speak.

Nicole was born and raised up in Santiago, Chile, and belongs to Chilean-American nationality. She is born to her father Andy Polizzi who is a volunteer firefighter and auto-salvage supervisor and her mother Helen Polizzi who is an office manager.

As of her education, she completed her schooling at Marlboro High School in Marlboro and further enrolled at Brookdale Community College to complete her degree and become a veterinary technician.

As of her career, she started her career with her debut on the MTV show, “Is She Really Going Out With Him?” and then made several appearances on several TV shows such as “MTV Video Music Awards”, “Cake Boss”, and “MTV Europe Music Awards”. She got her big breakthrough with the reality TV series, “Jersey Shore”.

In 2012, she acted in a spin-off show, “Snooki & Jwoww”. On March 14, 2011, she made her debut appearance on the WWE Monday Night Raw. At WrestleMania 27, she fought and won a Mixed Tag Team match along with partners Trish Stratus and John Morrison in the same year.

She was awarded the WWE 2011 A-Lister of the Year Slammy Award on December 12, 2011. In 2013, she participated in the 17th season of “Dancing With the Stars” and was eliminated in the seventh week of the show.

Moreover, she featured in several talk shows including “The Ellen DeGeneres Show”, “Jimmy Kimmel Live!”, “The View”, “The Wendy Williams Show”, and “Late Show with David Letterman”. Her first book titled “A Shore Thing”, was released in January 2011 which was followed by several other movies such as “Gorilla Beach”, “Baby Bumps” and “Confessions of a Guidette”.

She launched her own brand line, including “Snooki Couture”, “Snooki by Nicole Polizzi” and “SnookiLove”.In December 2019, she announced her retirement from the show, “Jersey Shore: Family Vacation”.

Reflecting on her personal life, she is a married woman who tied the marriage knot with her handsome husband, Jionni LaValle. The couple welcomed their first child, a son Lorenzo Dominic LaValle after five months of their engagement.

Here we are providing the list of favorites of Nicole Polizzi: Some Interesting Facts About Nicole Polizzi