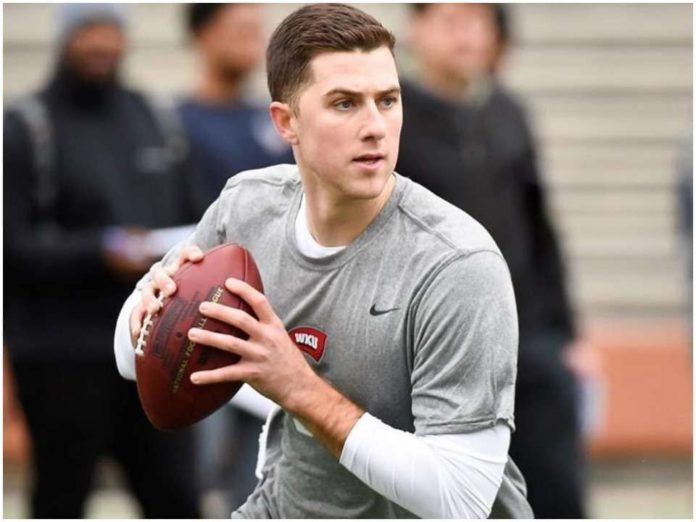 Football is ninety percent mental. The other half is physical and this quote briefly sums up ‘Mike White’ who is an American footballer. He currently plays for the National Football League’s New York Jets (NFL).

He attended the University of South Florida and Western Kentucky University during his collegiate football career. The Dallas Cowboys selected him in the fifth round of the 2018 NFL Draft. He was named to the New York Jets practice squad on September 25, 2019.

On January 4th, 2021, he signed a reserve/future contract with the Jets. He became the first Jets quarterback to pass for 400 yards since Vinny Testaverde in 2000 and the only quarterback in the NFL since Cam Newton to accomplish in his first professional start.

He looks more elegant with his brown eyes and black hair. Moreover, he is very conscious about his physique and follows a regular and healthy diet in order to keep himself fit as a fiddle with the body measurements of 42 inches chest, 34 inches waist and 15 inches biceps approximately.

Mike was born and raised in Pembroke Pines, Florida, USA, and belongs to American-White ethnicity. He is born to his father Mike White Sr. and his mother Annemarie White. There isn’t much information about his siblings.

As of his career, Mike White didn’t begin at quarterback till his senior year, when he led his team to the 3A state championship by throwing for 2,201 yards, 22 touchdowns, and two interceptions. He was selected Florida Player of the Year in Class 3A. After that, he decided to play collegiate football at the University of South Florida (USF).

He was a well-known baseball pitcher as well. As a junior, he won All-Broward County honors with a 9-2 record and a 0.43 ERA. He only completed 93 of 175 passes for 1,083 yards with three touchdowns and nine interceptions as a true freshman at South Florida in 2013, starting five games.

After South Florida head coach Willie Taggart transitioned from a pro-style approach to a spread offense in 2015, he transferred to Western Kentucky University. He missed the whole 2015 season due to NCAA transfer regulations. Then, to begin the 2016 season, he was named the starter quarterback.

His Senior Bowl performance significantly boosted his draught stock. On the 30th of March 2018, he attended Western Kentucky’s pro day. He also had a private workout with the New England Patriots and went on a pre-draft visit with the Indianapolis Colts, Tennessee Titans, and Miami Dolphins.

On November 21, he was promoted to the active roster again, was released again on November 23, and then re-signed to the practice squad. On January 4, 2021, he signed a reserve/future contract with the Jets. Following an injury to starter quarterback Zach Wilson, he made his regular-season debut in the second quarter of a Week 7 clash against the New England Patriots.

In the 54-13 loss against the Patriots, he ended with 202 passing yards, one touchdown, and two interceptions. On October 31, 2021, he got his first career start against the Cincinnati Bengals.

After a brief absence due to a head injury, he returned to lead the Jets to a 34-31 victory, completing 37 of 45 passes for 405 yards, three touchdowns, and two interceptions. White has become the first Jets quarterback to pass for 400 yards before Vinny Testaverde in 2000, and the only quarterback in the NFL since Cam Newton to accomplish so in his first professional start.

He is a married man who tied the marriage knot with his lovely wife Malloy White. The couple began dating in 2017, and after two years of dating, they married. They are also the proud parents of twin children named Millie Grace White and Maddox Grey White.

Here we are providing the list of favorites of Mike White: Some Interesting Facts About Mike White