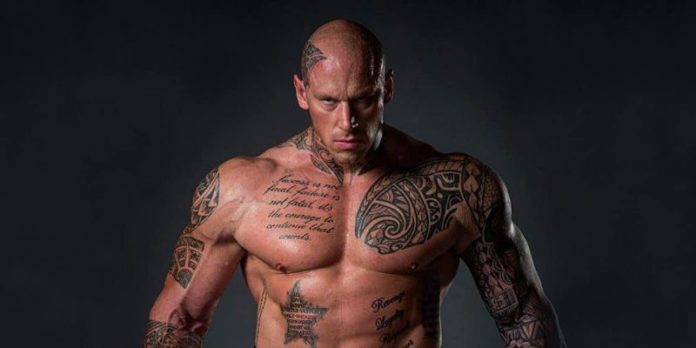 People who can intimidate you just by their size are rare in the world; one of them is Martyn Ford, the English bodybuilder. An injury that crushed his dreams did not stop him from looking for options and he found them quickly.

Martyn successfully rebuilt his career around fitness training after recovering from a deep depression.  The ‘real-life Hulk’ is the name that suits perfectly to this giant. With a lot of hit movies under his belt, he has been venturing on social media as well and his Instagram account has 1.1 million followers.

It is quite rare to see people with a height measuring 6’8”, Martyn ford even with this height has managed to keep his weight at 145 kg. Born on May 26, 1982, he is currently 40 years old. Along with his tall figure and muscular body what makes him unique, is the tattoos he has all over the body. Martyn has Brown eyes and prefers to keep his head shaved.

Martyn is not just the fitness trainer or a bodybuilder; he is also a Gym Owner, Fitness Model, Actor, personal trainer and a social media influencer. With all of these ventures Martyn has accumulated much more wealth than he would have imagined and a lot more is to come.  His current net worth is estimated to be $‎4.5 Million US dollars.

On the north-eastern outskirts of Birmingham, West Midlands, Martyn was born in the village of Minworth and grew up there, studying at the local high school. Warwickshire is the team he played cricket for as a youngster.

He married a woman named Sacha Stacey in 2009, who is seven years younger than him. in 2012 their first daughter, Imogen, was born and Sacha gave birth to the younger daughter Wynter in 2017.

Martyn began exercising at the age of 11 as he was always interested in fitness training. With a dream of representing the English national team one day, Martyn chose to play cricket but left it due to an injury when he was 19 years old.

It took him almost a year to recover and it was too late for him to get back in the field. After he fell into a deep depression rebuilding his body and gaining control over it gave him a sense of achievement.

His hard work paid up and he not only became a celebrity in the field of weight training but also received the opportunity to work in movies and operate three businesses under his name.  ‘Kingsman: The Golden Circle’ (2017), ‘Redcon-1’ (2018), ‘Accident Man’ (2018), ‘Robin Hood the Rebellion’, ‘Kill Ben Lyk’ and ‘Final Score’ are some of his globally watched movies.

Here we provide you the list of Martyn Ford’s favourite things. Some Interesting Facts About Martyn Ford