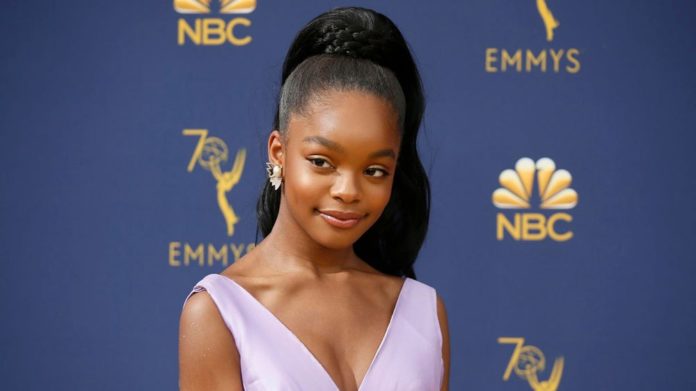 Although she is young, her age is no barrier for her creativity, talent and skills. Best known for appearing in the popular American comedy series ‘Black-ish’, Marsai Martin is an American child actor. Her parents got her photographs clicked when she was just a toddler and sent them to various talent agencies and thus she began modeling at a young age.

When she was 9 years old, she moved to Los Angeles with her parents hoping to grab film and TV roles. She has played a key role in the film ‘Little’ and worked as an executive producer becoming the youngest person in Hollywood to produce a film at the young age of 13.

Born on August 14, 2004, she is quite young and her age currently is 18 years old.  She is growing up very quickly her height currently measures 4′ 11″ and her weight is 42 Kg. Her body measurements are 30-22-31. She has quite a nice smile and her hairstyle is a unique one as well. The color of her eyes is dark brown and the color of her hair is Black.

Even though she is young and she is very well experienced in the Hollywood entertainment industry. Marsai Martin has worked as an actor and she is also one of the youngest producers Hollywood has seen.

The majority of her wealth comes from her ventures in the entertainment industry. As she is very young, her wealth is currently managed by her father. The total net worth for Marsai Martin is estimated to be $1 Million US dollars as of now.

Marsai Martin is the daughter of Joshua Martin her father and Carol Martin, her mother. She was born in Plano, Texas, USA, and grew up there till the age of 9 and then moved to Los Angeles hoping to start a career in the Hollywood entertainment industry.

Her parents have homeschooled her. She has attended an acting school in Lewisville, Texas called ‘Cathryn Sullivan’s Acting for Film’ as she was looking to polish her acting skills.

A commercial for ‘Choice Hotel’ was the first TV commercial she earned when she appeared as part of their “Voice of the People” campaign at the young age of 5. Later Marsai Martin was seen in a popular international car care company commercial for ‘Meineke’. As she moved to LA and auditioned for many film and TV roles she was offered a main role in the American sitcom ‘Black-ish’ in 2014.

After this success, she appeared in the main role in ‘An American Girl Story- Melody 1963: Love Has to Win’ which is a family drama, followed by a film ‘Fun Mom Dinner’ in which she played the supporting role of ‘Hannah’ in 2017. She also served as an executive producer, along with her father in the fantasy comedy film titled ‘Little’.

Here we provide you the list of Marsai Martin’s favourite things. Some Interesting Facts About Marsai Martin