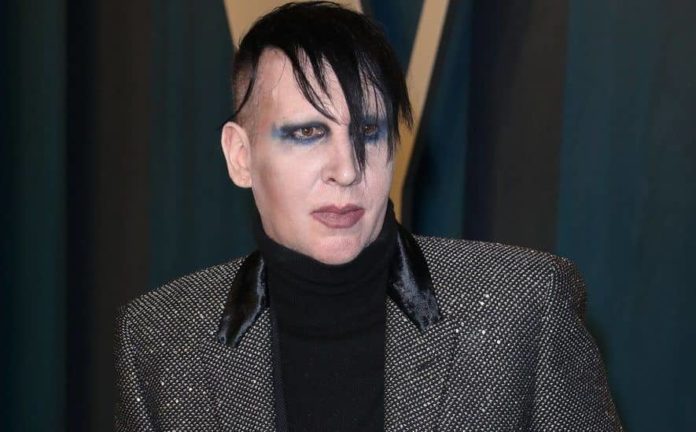 Brian Hugh Warner, popularly known as ‘Marilyn Manson’ is an American singer, record producer, visual artist, songwriter, and former music journalist. He is well recognized as the lead singer of the popular rock band of the same name, “Marilyn Manson”.

He is also the co-founder of his popular rock band along with guitarist Daisy Berkowitz. He is well known for his disturbing, and horror-inspired fashion that still remains the same as always. Manson’s outrageous behavior has earned him much popularity and is also known for his controversial stage personality.

He is a shock rocker with the controversial super hit album, “Antichrist Superstar”. Moreover, he also released other successful singles like “The Dope Show” and “The Beautiful People.”

Born on 5 January 1969, this handsome personality has turned 52 years old in the year 2021. He seems enough tall with his height which is 185 in centimeters and 6’1” in feet & inches. He seems very fit and healthy with a weight of 82 in kilograms and 181 lbs in pounds.

His eye color is Hazel and the color of his hair is black. Moreover, he is very conscious about his physique and follows a regular and healthy diet in order to keep himself fit as a fiddle with the body measurements of 41 inches chest, 34 inches waist, and 15 inches biceps approximately.

He has quite good earnings from his professional career as a singer, songwriter, and record producer and has undoubtedly managed to amass a healthy fortune. His major source of income came from his several songs, albums, movies, and also from his arts. According to the sources, his estimated net worth is $25 million approx.

Marilyn was born and raised up in Canton, Ohio, U.S, and belongs to the white Caucasian ethnicity. He is born to his mother Barbara Warner Wyer and his father Hugh Angus Warner. Marilyn is the only child of his parents.

As of his education, he completed his schooling at Heritage Christian School and later transferred to Glen Oak High School. After that, he studied to gain a degree in journalism from Broward Community College in Fort Lauderdale.

In 1994, his band released their debut album with the name of “Portrait of an American Family” which proved to be an instant hit. Later, he released the EP titled “Smells Like Children”. His three of the band’s albums have been awarded gold and two more went platinum in the US alone.

In 1996, the band got their biggest breakthrough with their second studio album titled “Antichrist Superstar”. After that, he released many albums such as “Holy Wood”, “Mechanical Animals”, and “The Golden Age of Grotesque”.

In 2009, “The High End of Low” was released which included hit singles, such as “Running to the Edge of the World” and “I Want to Kill You Like They Do in the Movies”. In May 2012, he released his eighth studio album, “Born Villain” which is followed up with “Hey Cruel World…Tour”.

His ninth studio album titled “The Pale Emperor” was released on January 20, 2015. He released his tenth studio album “Heaven Upside Down” after two years. He made his debut in the film “Lost Highway” in 1995.

Moreover, he also featured in many minor roles and cameos, including The Hire: Beat The Devil, The Heart Is Deceitful Above All Things, Rise, Party Monster, Jawbreaker, and Showtime’s comedy-drama TV series Californication. Since 2004, he worked on his directorial debut, Phantasmagoria: The Visions of Lewis Carroll.

Apart from this, he began his career as a watercolor painter in 1999. He released his eleventh studio album titled “We Are Chaos” on September 11, 2020.

Reflecting on his personal life, he is a married man who currently tied the marriage knot with his girlfriend Lindsay Usich. Previously, he got engaged to Rose McGowan, a popular American actress, activist, and also a singer. They got engaged in February 1999 but unfortunately parted their ways in 2001 because of “lifestyle differences”.

After that, he dated an American vedette, burlesque dancer, model, businesswoman, and actress Dita Von Teese in the same year in 2001. He proposed to beautiful Teese on March 22, 2004, after dating for over 3 years, and got married in a private, non-denominational ceremony. But his wife filed for divorce due to “irreconcilable differences”.

Thereafter, he came into a relationship with actress, model, and musician Evan Rachel Wood in 2007. In 2010, he proposed to Wood during a Paris stage performance but broke off the engagement later that year.

Here we are providing the list of favorites of Marilyn Manson: Some Interesting Facts About Marilyn Manson