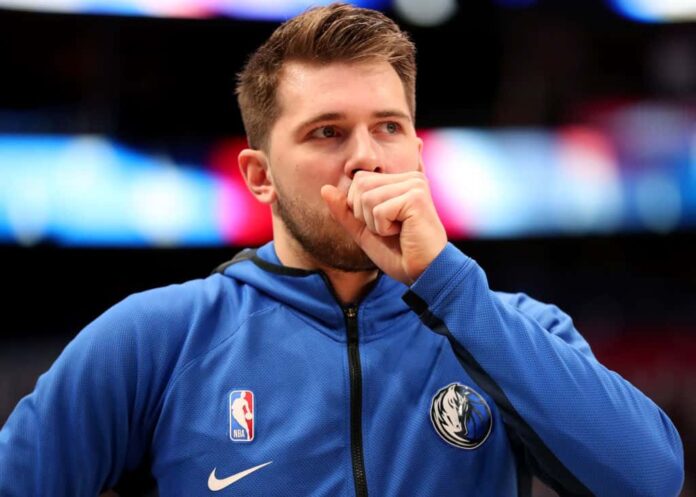 A Slovenian professional basketball player Luka Doncic rose to stardom in no time and plays in NBA from Dallas Mavericks. He was born on 28th February 1999 to the father who is a former basketball player. Since Union Olimpija in Slovenia, he became a prominent player. From 2015 to 2018 he was associated with Real Madrid.

In 2018, when he was just 19 years old he earned EuroLeague MVP and EuroLeague Final Four MVP award. He was named the ACB’s Most Valuable Player and ACB Best Young Player. In 2016, he made his senior debut at the age of 17. In 2017, he helped his team to win its first EuroBasket title.

Luka Doncic has an impressive height of 203 cm or 6’9” feet inches. Along with great height, he weighs 103 kg and 227 lbs. He will turn 23 years old. He has a large brown color set of eyes and blonde spooky hair.

He has an athletic body type with the body measurement 44 inches chest, 34 inches waist, and 36 waist hips whereas his biceps size are 16 inches. His shoe size is 11 (US) or 44 (UK).  On his left forearm, he has a tattoo of a tiger.

According to the sources, Luka Doncic’s net worth is estimated to be $7 million approximately.

Luka Doncic was born in Ljublijana to Sasa Doncic and Mirjam Poterbin. His mother was an owner of beauty salons whereas his father is a basketball coach and former basketball player. His mother is Slovenian and his father belonged to Slovenian of Serbian descent.

After the divorce of his parents, his custody and legal guardianship were being granted to his mother. When Luka was a toddler, he played various sports like football after which he grew tall. He attended Osnovna Sola Mirana Jarca where he began playing organized basketball.

Luka started his career as a basketball player at the age of 8 and started training at Union Olimpija. He played for the club’s under-12 selection team. In 2011, he was named as Most Valuable Player at Vasas Intesa Sanpaolo Cup in Budapest, and Olimpija finished as runners-up.

He again earned an MVP honor in 2012, at under-13 Lido di Roma Tournament. In September 2012, he signed a five-year contract with Real Madrid and helped the team to win the Minicopa Endesa. He also earned MVP accolades at under-16 Spain Championship.

In 2015, his team was named in the All-Tournament Team and won the under-18 Ciutat de L’Hospitalet Tournament.  In July 2018, he signed a rookie contract with the Dallas Mavericks and became the youngest 20-points scorer in franchise history when he made 31 points and 8 rebounds against Minnesota Timberwolves. Some Interesting Facts About Luka Doncic