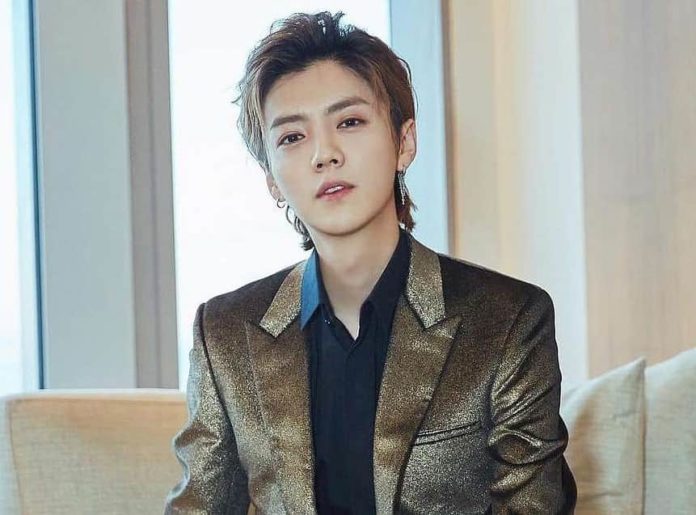 Success is the sum of small efforts repeated day in and day out, this line has very well proved by ‘Lu Han’ who is an eminent Chinese singer and actor. He is well recognized and famous for being the former member of the South Korean-Chinese boy band, Exo.

But, Han left this group in 2014 and pursued his solo career. Moreover, he released several solo studio albums and also starred in numerous movies and television series.

Born on 20 April 1990, this handsome personality has turned 32 years old. He seems enough tall with his height which is 178 centimeters and 5’10” in feet & inches. He maintains himself very fit and healthy with a weight of 78 kilograms and 171 lbs in pounds.

Moreover, he is very conscious about his physique and follows a regular and healthy diet in order to keep himself fit as a fiddle. His personality is enhanced by his dark brown eyes and black hair.

His major source of income comes from his singing and acting career as well as he also endorses several local and international brands including Oppo, Puma, and many more. Lu Han’s net worth is estimated at around $15 million.

Lu Han was born and raised up in Haidian, Beijing, China, and belongs to Asian (Chinese) ethnicity. He is born to his father Lu Xu while his mother’s name is not known. There is no information about his siblings and it seems that Lu Han is the only child of his parents.

As of his education, he completed his schooling at Beijing Shida Middle School and Beijing Haidian Foreign Language Shi Yan School. After that, he enrolled at the Seoul Institute of the Arts where he majored in Applied Music.

In 2014, he left the group amid legal battles and also filed a lawsuit against SM Entertainment to nullify his contract. After that, he started performing songs for movies and pursued a solo career. In September 2015, he released his first digital album, Reloaded I, and his first studio album, Reloaded in December 2015.

In 2017, his XXVII album series won the “Album of the Year” award. In September 2017, he released his second studio album, XXVII+ September. In March 2021, he released his third studio album, π: Ready To Play? As of his acting career, he made his debut in 2015 with the film 20 Once Again and won the “Newcomer of the Year” awards as well as the “Most Popular Actor” for this film.

In 2015, he made his television debut with the variety show, Keep Running and in 2017, he made his drama debut in Fighter of the Destiny with the role of Chen Changsheng. He acted in the films like The Witness, Time Raiders, The Great Wall, and Shanghai Fortress. Lu Han also acted in the drama series, Sweet Combat, CrossFire, and Sisyphus.

As for his personal life, he is not married yet but he is in a romantic relationship with Chinese actress, Guan Xiaotong. The couple has been dating each other since October 2017.

Here we are providing the list of favorites of Lu Han: Some Interesting Facts About Lu Han