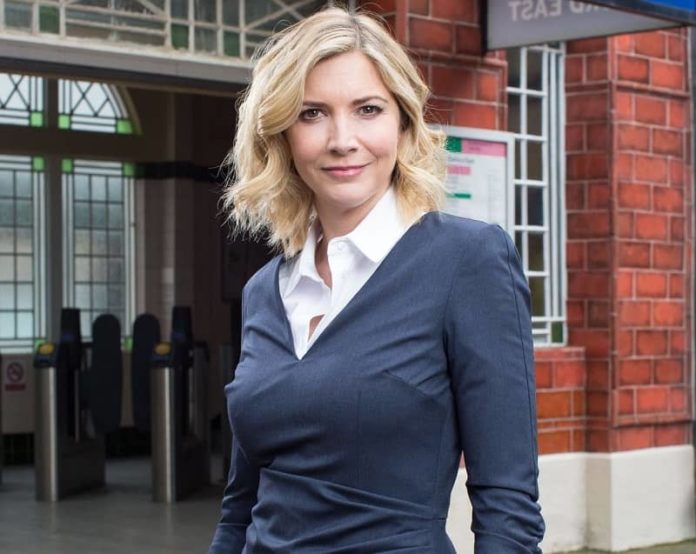 Nothing is impossible with hard work, dedication, and perseverance, this line has been very well proved by Lisa Tamsin Faulkner who is an English actress, presenter, and celebrity chef.

Moreover, she captured huge publicity as the host of the British television culinary program “What’s Cooking?”. Besides this, Lisa became the champion of the “Celebrity Masterchef” reality cooking contest in the year 2010.

Born on 19th February 1972, this renowned personality has turned 50 years old. She is blessed with a perfect height which is 163 centimeters and 5’4” in feet & inches. She seems as fit as fiddle with a weight of 57 kilograms and 126 lbs pounds.

Her beauty is enhanced by her blonde hair and dark brown eyes. She is very conscious about her health and maintains her figure with the measurement of 35 inches breast, 27 inches waist, and 36 inches hips.

This versatile lady, Lisa accumulates a very handsome amount of money through her professional career in the entertainment field. According to the sources, her estimated net worth is between $1 million to $5 million as of 2021.

Born and growing up in Merton, London, England, Lisa belongs to a British-white ethnic background. She is the loving and caring daughter of David Faulkner (father) and Julie (mother). Moreover, she grew up with her younger sister named Victoria Faulkner. Unfortunately, her mother, Julie, died from throat cancer when Lisa was sixteen.

She has since discussed her bereavement in a number of newspaper and magazine interviews. As for Lisa’s education, she studied at Tiffin Girls’ School in Kingston upon Thames. Other than this, she never shared any information about her educational background.

After that, she got the opportunity to be starred in the 1995 British film “A Feast at Midnight” and got appeared in “And The Beat Goes On” in 1996. Moreover, this gorgeous lady played Louise Hope in the Channel 4 soap “Brookside”. She also starred as Dr. Victoria Merrick in “Holby City” between 1999 and 2001.

Furthermore, Faulkner starred on ITV as D.S. Emma Scribbins in “Murder in Suburbia” in the year 2004. She narrated the BBC One show “Heir Hunters” from June 2008. Besides this, Lisa regularly taught at Amanda Redman’s Artists Theatre School.

In addition to this, between 1999 and 2004, she was voted one of FHM’s “100 Sexiest Women in the World” six times. Apart from that, she served as a regular contributor to “Big Brother’s Little Brother” and also contributed to the Sky1 magazine show “Angela and Friends.”, and the Channel 5 chat show “The Wright Stuff”.

Thereafter, in the year 2010, she won “Celebrity Masterchef”, beating Christine Hamilton and Dick Strawbridge in the final, and also starred in the third series premiere of the Canadian series “Murdoch Mysteries”.

Other than this, Lisa worked as a co-host of “Real Food Family Cook-Off” on Channel 5 with Matt Dawson and also co-hosted the daytime Channel 4 series “What’s Cooking?” in 2013 with Ben Shephard. After that, she was reunited with Shephard to co-host an episode of “This Morning Summer” in the year 2015.

Later, in March 2017, it was announced that Faulkner would be joining “EastEnders” as Fi Browning, a “stylish and sophisticated” businesswoman. Further, Lisa along with John Torode was given a weekend cooking show as they host “John And Lisa’s Weekend Kitchen” on Sunday mornings on ITV. Moreover, in July 2019, she starred on “Celebrity Gogglebox” alongside friend Nicola Stephenson.

Talking about her relationship status, Lisa is a married lady who has been in a relationship with the Australian chef John Torode since 2015. This lovely couple got married on 24th October 2019 at Aynhoe Park, Oxfordshire.

In fact, the duo first met when Lisa competed in the 2010 series of Celebrity MasterChef, but they were still married to their former partners at the time. Other than this, Faulkner was previously married to Chris Coghill in 2005.

They also adopted a fifteen-month-old girl who was born in 2006. However, their relation broke up in the year 2011 by signing a divorce. As of now, Lisa is living a happy and blissful life with her beloved named, John Torode.

Here we are providing the list of favorites of Lisa Faulkner: Some Interesting Facts About Lisa Faulkner