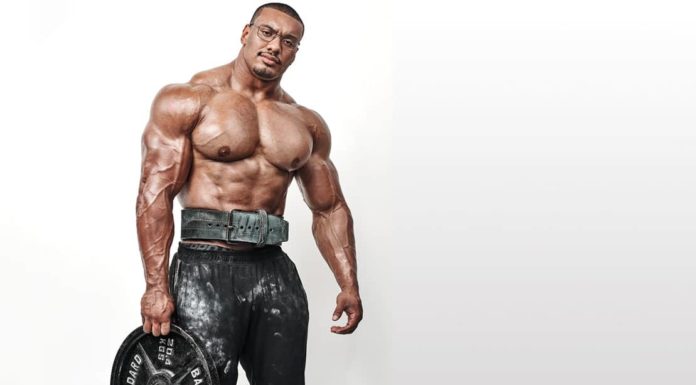 Growing up in poor neighborhoods of Bronx, New York, all a child can wish for is to become stronger and bigger so nobody would bully him, and so was the case for Larry Wheels, who went from living in extreme poverty as a child to becoming one of the strongest powerlifters in the world.

Larry, who started with a broomstick and concrete blocks, soon landed his first job at a gym and realized his full potential. He was already the world record holder in the 242-pound division by 2017.

The World Raw Powerlifting Federation (WRPF) gave him plenty of opportunities through their competitions. People respected his honesty and candid approach when he admitted to using steroids in the past and thus he gained many more new fans in 2018.

Born on December 3rd, 1994, Larry is currently 25 years old. Larry appears quite tall as well as muscular and his height is 6′ 1″ in feet and he weighs 115 kg. His biceps are enormous 18 inches in diameter and his vital stats are 44-34-38 approximately.  Larry has Dark Brown eyes and the color of his hair is Black.

Accumulating his wealth through successful business ventures like PR Lifestyle and the Training Wheels Program, Larry continues to take part in powerlifting competitions and build his brand. Larry earns quite a lot by placing ads on his videos as he is one of the most famous fitness YouTube stars. Larry’s current net worth is estimated to be over $750,000 with a definite increase in the near future.

Larry has not revealed much information about his family and education however, it is known that he was born and raised in Bronx, New York, USA.  His father left him just after his first birthday and his mother Mrs. Williams worked many jobs to support her young son. He was forced to move in with his grandmother at the age of six after and after the age of 11 he was already bouncing from one foster home to another.

After joining the gym and watching the bodybuilding environment close enough, he initially thought of perusing bodybuilding but later powerlifting became the obvious choice for him.

Larry began crafting a custom training program which he called “The Training Wheels Program”  did it with no friends, no father and no personal trainer helping him. In a powerlifting competition in New York, he decided to give a try to his abilities and without any experience of professional content, joined the competition and excelled.

He already held two world records; with the most important being the 2,275lb (1031kg) total in all three exercises by 2017, which made him one of the brightest young stars in the entire sport. Larry admitted to using steroids at the beginning of his career, but he stopped using these substances when he started competing professionally.

Here we provide you the list of Larry Wheels’s favourite things. Some Interesting Facts About Larry Wheels