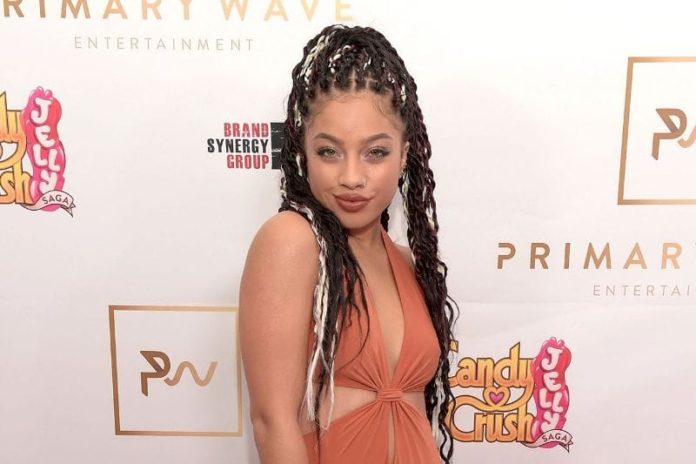 The depth of your hard work will determine the height of your success, this line has been very well proved by Kiana Ledé Brown who is an American singer, songwriter, actress, and pianist. Moreover, she gathered huge fame after winning the “2011 KIDZ Star USA” competition.

Besides this, she is also eminently known for several singles, and Eps such as “Christmas by Lede”, “Soulfood Sessions”, “I Choose You”, “Myself” and “Fairplay” etc. Other than this, Kiana also captured huge publicity for playing the role of Zoe Vaughn in season 2 of the MTV horror series, “Scream”.

Born on April 3, 1997, this gorgeous singer has turned 25 years old. Lede is blessed with a good height of 157 Centimetres and 5’2” in Feet & Inches. Her hazel green eyes and shiny dark brown hair enhance the charm of her beauty.

She is very conscious about her physique and follows a regular diet to keep herself fit with a weight of 54 kilograms and 119 lbs in pounds.

This versatile personality, Kiana Lede accumulates a very handsome amount of income through her multiple professions such as singer, songwriter, pianist, and actress in the entertainment field.

According to the sources, Kiana’s estimated net worth is $1 million approximately. Having started her career at a very young age, she has managed to establish herself as one of the prominent singers in the music industry.

Born and growing up on the outskirts of Phoenix, Arizona, the United States, Kiana belongs to a multiracial ethnicity including black, white, and Hispanic. She is the loving and caring daughter of Shakira Matherly (mother) and Michael Brown (father).

As of her education, Lede attended Mountain Pointe High School. Other than this, she never disclosed any information about her educational background.

Moving towards her career, Kiana developed an interest in music during her childhood. In fact, she was also gifted her first Karaoke machine at the age of three. Soon, Lede started to take professional voice lessons and piano classes. Moreover, she also used to take part in school plays and beauty pageants at that time.

Later, Kiana’s mother discovered Kidz Bop a website in the year 2011 in order to upload and share videos of themselves performing called, “Kidz Bop” where she uploaded a video of Lede performing an original number on the piano which was selected as a finalist.

After that, Kiana got the victory at Kidz Bop’s “2011 Kidz Star USA” talent competition and secured a recording contract with RCA Records. She also got a lead in the Kidz Bop 21 music video and commercial. Besides this, she released her debut single called Hey Chica, an upbeat track on June 19, 2012.

The track is dedicated to women’s empowerment and encourages young women to feel beautiful in their own skin. In addition to this, she performed the song on The Today Show and at the 86th annual Macy’s Thanksgiving Day Parade.

Furthermore, Kiana moved to North Hollywood at the age of 16 where she worked at a gymnastics center and a jazz club due to her receiving no advance from RCA Records. Later, this versatile personality was motivated by Grammy award-winning production duo Rice N’ Peas for performing cover songs.

Thereafter, Lede released her debut EP called “Soulfood Sessions” under the music label Orange Factory Music in December 2015. Additionally, she has cast in the series regular role as Zoe Vaughn on the second season of MTV’s Scream in the year 2016.

After that, she also got the lead role alongside Joseph Simmons of Run-DMC in the Netflix original series All About The Washingtons in the year 2018. However, this series was canceled after only one season. Apart from that, she signed with Republic Records following her departure from RCA Records.

In July 2018, she released her debut EP Selfless which includes her breakout single “Ex”, which became her first entry to the Billboard charts, peaking at number 9 on the US R&B Songs charts and at number 1 in various countries. In fact, the EP has earned platinum status from the RIAA as of June 2020.

Other than this, in June 2019, Kiana’s second studio EP, Myself, was released which included the single “Bouncin” featuring rapper Offset and peaked within the top 30 of Billboard’s rhythmic airplay chart.

Moreover, on April 3, 2020, she highly anticipated a 17-track debut album, titled Kiki was released which debuted at number 30 on the Billboard 200. The album also includes singles such as “Forfeit”, “Mad At Me”, “Only Fan”, “Chocolate” and many more.

Later, a tour was also planned to start in Europe, however, it was eventually postponed to 2021 due to the COVID-19 pandemic. Apart from that, Kiana would later make a few guest appearances on tracks with Queen Naija, Usher, and others. On October 23, 2020, Kiana released the deluxe edition of Kiki including seven bonus tracks.

Talking about her relationship status, Kiana is unmarried. However, she has dated YouTube Star, Luke Brooks previously. Moreover, the couple started to date each other around April of 2014. In fact, the duo was together for almost 5 years before splitting. As of now, Lede is living a single and happy life.

Here we are providing the list of favorites of Kiana Lede: Some Interesting Facts About Kiana Lede