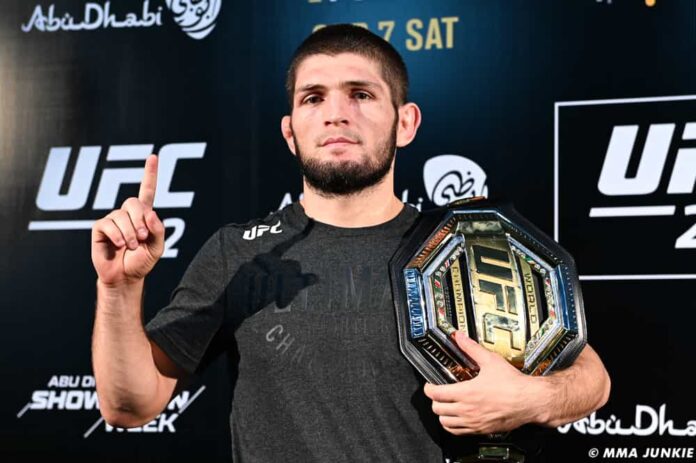 A Russian mixed martial artist, who competes in several forms like judo, wrestling, sambo Khabib Abdulmanapovich Nurmagomedov is one of the most popular sports stars in the world. Best known for his record of longest unbeaten record of 27 wins, he fights in the lightweight division of the Ultimate Fight Championship.

Born on the 28th of September 1988 Khabib Nurmagomedov is currently 31 years old. He appears to be tall, slim, and has a toned body figure. His height measures 5 feet 8 inches while his weight is 70 kg approximately. His body figure measurements are 40-32-35 and his biceps measure 15.5 inches. He has dark brown eyes and the color of his hair is dark brown as well.

Starting with local fights Khabib Nurmagomedov has become one of the topmost professional fighters in the history of the world. He has defeated many popular champions with his unique style and ability to fight. He has earned many titles and most of his wealth comes from his appearance in The UFC. The total net worth estimated for Khabib Nurmagomedov is $1.7 million US dollars as of now.

Khabib Nurmagomedov was born and raised in Sildi, Tsumadinsky District, Russia. He is the son of Abdulmanap Nurmagomedov but has not shared the name of his mother. He grew up with his brother Magomed Nurmagomedov and sister Amina Nurmagomedov. He studied at his local High school but it is not known if he attended any college.

Khabib made his debut in MMA in September 2008 and secured four wins, of which three were in a day within a month. Including his win at his M-1 Global debut in 2009, he won 12 matches in the three years that followed. He went on to compete for the ProFC promotion, two years later.

The event which caught the attention of the Ultimate Fighting Championship (UFC) was his impressive record of 16 wins and no losses. After his debut match was against Kamal Shalorus in early 2012, he set a new record of 21 successful takedowns from 27 attempts during his match against Abel Trujillo in 2013.

He had to cancel several matches due to injuries and ill health between September 2014 and 2015. With a win at about against newcomer Darrell Horcher at the UFC, he made a comeback in 2016.

Nurmagomedov defended his UFC lightweight title against Conor McGregor at UFC 229 on October 6, 2018, by defeating McGregor in the fourth round via submission after he emerged as the UFC Lightweight Champion on April 7, 2018.

Here we provide you the list of Khabib Nurmagomedov’s favorite things. Some Interesting Facts About Khabib Nurmagomedov