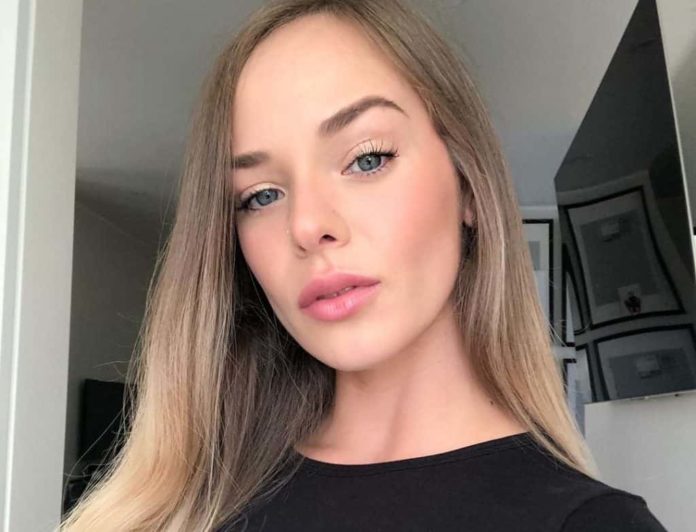 The wife of ‘The Mountain’, Kelsey Henson is a Canadian model, blogger, fitness influencer and Instagram star. She is best known as the wife of actor Hafþór Júlíus Björnsson, who portrayed the role of Gregor ‘The Mountain’ Clegane in ‘Game of Thrones’ for five seasons.

The couple together has gained attention on red carpet events due to the huge 19-inch difference in their heights. Before becoming a fitness influencer and wife of Hafþór Júlíus Björnsson, she has worked with many organizations involved in the construction field or financial services. She is popular for her personality, tattoos, and relationship with her husband.

Kelsey Henson weighs 53 kg and 117 lbs in pounds. She has a height of 158 cm or in feet inches 5’2” whereas her husband’s height is 6 feet 9 inches. Her hair color is blonde and eye color is striking blue.

Her figure measurement is 35-24-36 approximately. She turned 32 years old. She is a tattoo lover and has multiple tattoos over her body. She had inked a flower pot and cup on her left thigh whereas there is a woman face inked on her left thigh.

Kelsey Henson’s estimated net worth is $1.5 million approximately which she accumulated from sponsorship and being a fitness influencer.

Kelsey Henson was born to Canadian parents on March 5, 1990, in Alberta, Canada. Names of her parents are not revealed yet but she has a sister named Kathleen Henson. In 2012, she was enrolled in the University of Alberta to study Occupational Health & Safety.

In 2017, the Alberta Construction Safety Association (ACSA) honored her with two construction safety designations, National Construction Safety Officer (NCSO) and Health & Safety Administrator (HSA). In the same year, she started dating Hafþór Björnsson and tied the knot on August 24, 2018, with him in Iceland.

Kelsey started her career in 2010 by working as a financial services representative at the Canadian Imperial Bank of Commerce. In 2012, she left the job as she entered the University of Alberta and worked at Earls Kitchen + Bar in Fort McMurray, Alberta as a server.

In 2015, she worked for six months at Guthrie Mechanical Services Ltd as a building operator. Later, she joined Tervita Corporation as a Field Services Administrator and worked there for two years.

After working for so many organizations, she chose to become a fitness influencer. She is associated with the fitness circuit with her husband, and his gym, ‘Thor’s Power Gym. Some Interesting Facts About Kelsey Henson