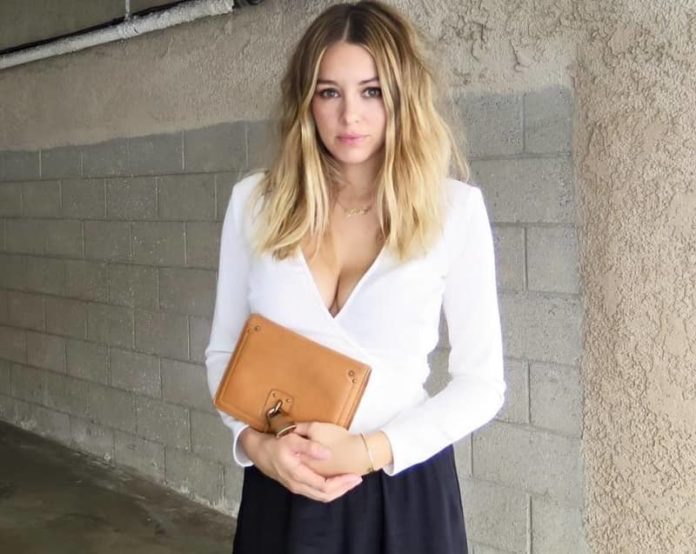 Successful celebrities are not gifted, they just work hard and then succeed on purpose, this line has been very well proved by Keeley Hazell an English model and actress who has appeared in publications such as “FHM,” “Loaded,” “Nuts,” and “Zoo Weekly.” Hazell covered The Sun’s Page 3 calendars in 2006 and 2007.

]In 2006, she made her cinematic debut in the British romantic drama film “Cashback.” She has also made news for her relationship with Jason Sudeikis, an American actor with whom she began dating on February 28, 2021.

Being a model, she is very conscious about her physique and figure and takes care of her weight which is 56 in kilograms and 123 lbs in pounds. She has a beautiful doll-like face which is complemented by her hazel eyes and dark brown hair.

Her acting and modeling contracts are undoubtedly her main sources of money. Her projected net worth, including all of her earnings, is $5 million, while her boyfriend, Jason Sudeikis, is expected to have a net worth of roughly $20 million as of 2021.

Keeley was born and raised up in Lewisham, London, England, United Kingdom and belongs to the white ethnicity. She is born to her father Roy Hazell and her mother Amber Hazell. As for her education, she enrolled at Ravensbourne School in Bromley.

She dropped out of school at the age of 16 to work as a hairdresser. She went on to study fashion at Lewisham College after that.

As of her career, Keeley Hazell began her modeling career in December 2004 after winning The Sun’s Page 3 Idol competition. She also received £10,000 in “sexy clothing” and a “one-year membership to the Rex Theatre and bar.” She was also offered a one-year deal with The Sun as an exclusive glamour model.

She sprang to fame as a model after appearing on the cover of The Sun’s Page 3 calendars in 2006 and 2007. In addition to making her own wall calendars, her 2007 edition sold 30,000 copies in its first few days of publication. In the year 2008, she and her agent, Ginny Mattrick, co-founded Muse Management, a modeling agency.

As a model, she was well-received, and she was named to the list of Sexiest Women multiple times till 2013. In January 2013, she made her comeback to modeling with an appearance in FHM. Hazell sponsored Sony Computer Entertainment Europe’s Formula One 06 for Playstation 2 and Playstation 3, which was released in July 2006.

After appearing in the British romantic comedy-drama film “Cashback” in 2006, she made her cinematic debut. In 2007, she co-hosted “Byte Me TV” with Gary Schwartz, an IT specialist. She made her television debut in the BBC Three documentary Page Three Teens in 2008. In the same year, she released “Voyeur,” a pop music song.

In the short film “Venus and the Sun,” she portrayed the lead part. “Like Crazy,” “St George’s Day,” “The Royals,” and “Queen of Hearts” are among the TV shows and films in which she has appeared. Hazell starred in the comedy “Awful Nice” in 2013 and the horror feature “Whispers” in 2015. In 2020, she starred as Bex in the streaming television series “Ted Lasso.”

Keeley Hazell is not married yet. She is in a love relationship with Jason Sudeikis at the moment. Jason is an actor, comedian, producer, and writer from the United States. On February 28, 2021, the pair began dating each other. Hazell formerly had a relationship with David Walliams.

Here we are providing the list of favorites of Keeley Hazell: Some Interesting Facts About Keeley Hazell