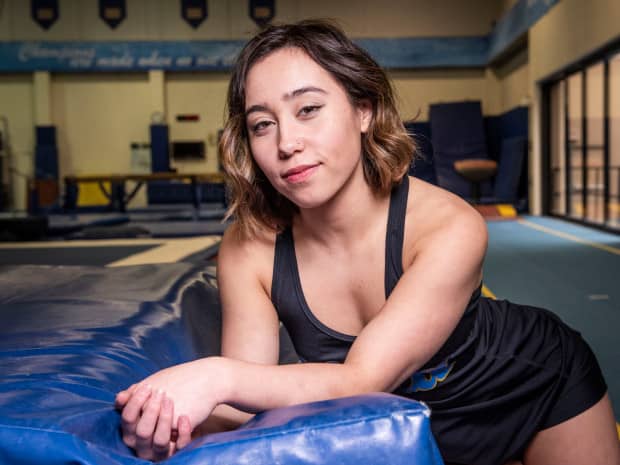 Gymnastic is one of the less glamorized sports in the sporting world but some athletes have found their way through it as well and one of them is Katelyn Ohashi. Former Junior Olympic athlete and blogger is best known for her performances as an artistic gymnast.

This American gymnast was coached by Valeri Liukin and trained in Plano, Texas as an “elite” at the World Olympic Gymnastics Academy (WOGA). To have defeated one of America’s top gymnasts, Simone Biles in a major competition, Katelyn is one of the few who have done it.

Katelyn actively shares her views on her blog and she is extremely vocal about the hazards of body shaming.

Born on the 12th of April 1997, Katelyn Ohashi is currently 25 years old. She appears tall and healthy and has an athletic body figure type. Her body figure measurements are 34-24-35 and she wears no. 5 in the shoe size.

The height of Katelyn Ohashi is 5′ 1″ and her weight is 48 Kg approximately. She has a beautiful smile and Brown colored curly hair and the color of her eyes is brown as well.

As it is evident that sports personnel in America earn a lot of wealth, although gymnastics is not much of celebrated sports. Katelyn became famous after her gymnastic videos went viral on YouTube. Even though she is a celebrity in the US, she has chosen not to disclose her wealth as of now.

Katelyn Ohashi was born in Seattle, Washington, United States and grew up there. She is the daughter of Richard Ohashi, her Asian–American father and her mother Diana Ohashi, who was a former high school gymnast.

She grew up with three brothers Ryan, Kyle, and Kalen Ohashi. She studied at the Plano Senior High School and after graduating from there, she went to The University of California.

Earning the first position in floor exercise 2009 Junior Olympic National Championships was Katelyn’s first national-level gymnast competition. In the junior division for floor she held the fourth position at her first elite meet in the ‘U.S. Classic’ in Des Moines, Iowa.

She won the silver for floor exercise for the National Championships in Dallas. Katelyn was part of the US team that won the City of Jesolo Trophy in the year 2011. Two torn shoulders and a spine surgery kept her from competing until 2015.

For the 2015- 2016 season she began with the UCLA Bruins. In the Pac-12 Gymnastics Championships for the year 2018 she was given the collegiate title for her Michael Jackson themed performance in the floor division.

Here we provide you the list of Katelyn Ohashi’s favorite things. Some Interesting Facts About Katelyn Ohashi