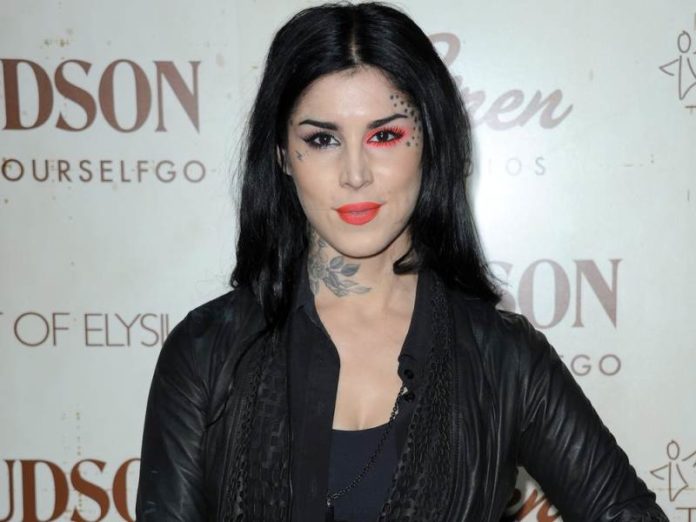 Katherine von Drachenberg, professionally renowned as ‘Kat Von D’ is a prominent Mexican-American tattoo artist. She is well recognized for crafting intricate and artistic designs, drawn from different cultures. Be it learning the piano, or creating Latino-inspired tattoos, she is often heard crediting her grandmother for exposing her to art.

She found success and recognition at True Tattoo after trying her luck at various tattoo shops and became one of the busiest tattoo artists in Los Angeles. Moreover, she opened her own Hollywood tattoo parlor in Hollywood. Besides this, she has displayed her talent in modeling and acting too.

Kat’s body is complemented by her beautiful brown eyes and her silky long black hair. Her figure measurements are 33 inches breast, 29 inches waist, and 35 inches hips.

She earns the sum of a good amount of money and fame through her profession and her estimated net worth is said to be around $14 million.

Kat was born and raised up in Montemorelos, Nuevo Leon, Mexico and belongs to a mixed (German- Spanish- Italian) ethnicity. She is born to her father René Drachenberg and her mother Sylvia Galeano.

She has been grown up with his brother Michael Von Drachenberg and a sister named Karoline Von Drachenberg. As for her education, she dropped out of school at 16 to follow her profession as a tattoo artist.

As of her career, she spent time in various shops to gain experience and polishing her talent. After that, she worked with Tim Hendricks, Clay Decker, and Chris Garver. They recommended she try her luck at Miami Ink. In 2005, she was hired at 305 Ink, Miami, as a replacement to injured Darren Brass.

She started working for Miami Ink for two seasons but her differences with owner Ami James forced her to leave. In 2007, she opened her shop, High Voltage Tatto after returning to Los Angeles. After that, she created her own cosmetics line named Kat Von D for Sephora in 2008.

In 2010, she launched an art gallery and boutique Wonderland Gallery. In January 2009, she released her first book High Voltage Tattoo with a foreword penned by Mötley Crüe’s Nikki Sixx. This book was a compilation of tattoos and artwork. In October 2010, her second book The Tattoo Chronicles was out.

Before ending in 2011, LA Ink ran for four seasons before. It was claimed by her that she decided to not continue the show further. In 2008, she is credited with the creation of the MusInk Tattoo Convention and Music Festival in Southern California.

She started her clothing line named KVD Los Angeles and Kat Von D Los Angeles during the fall 2011 season in Canada and the United States. Moreover, she appeared as a guest on various chat shows and television series namely Bam’s Unholy Union, MADtv, Pimp My Ride and I Love Jenni.

She also appeared in few movies, such as The Bleeding and Bam Margera Presents: Where the Fuck Is Santa?. Kat received Farm Sanctuary’s Compassion in Action Award in 2016. She also marked her appearances on three songs on the 2018 album Alive by IAMX. Moreover, she also appeared in the song Black Blood, Red Kiss of Gunship album Dark All Day.

Reflecting on her personal life, she is a married woman who tied the marriage knot in 2018 with Mexican tattoo artist and author Rafael Reyes. The couple was blessed with a lovely baby boy named Leafar Von Drachenberg Reyes.

Previous to this, in 2003, she married her fellow artist named Oliver Peck but the couple got separated in 2007 due to some reason. She started dating Nikki Sixx, a bassist of the band Motley Crue a year later in 2008. After that, she dated Jesse James in 2010 and called off their affair in September 2011.

Here we are providing you the list of her favorite things of Kat Von D: