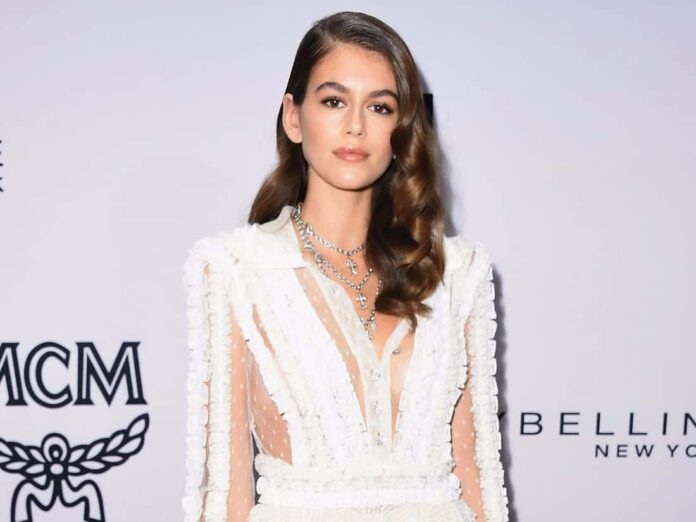 But to become one of the most sought-after American divas today. It was her talent and dedication which paved the way. Kaia did well in her studies and always scored good grades as it was her mother’s wish that Kaia must focus on her studies.

With the brand ‘Versace’, her professional modeling career kicked off at the age of 10 and she has constantly startled the world with her strong persona and ‘goddess-like’ face to date.

Born on the 3rd of September 2001 Kaia Gerber will turn 21 years old. She appears to be tall and as required by her profession she keeps herself healthy and has a slim and toned body figure.

Her body figure measurements are 32-24-33 and she wears number 6 in the shoe size. Gerber’s height measures 5 feet 9.5 inches and her weight is 55 kg approximately. Kaia has a pair of brown-colored eyes and has long and straight brown color hair as well.

After starting at a young age it did not take Kaia much long to adapt to the modeling and entertainment world because of the guidance of her mother. Kaia Gerber has been one of the most sought-after young models and has been associated with well-known brands as well.

Most of her wealth comes from her modeling and acting career and she is just at the beginning of it. The total net worth estimated for Kaia Gerber is $1.5 million US dollars as of now.

A native of California, Kaia Gerber was born and raised in Los Angeles, California, USA. She is the daughter of the famous model Cindy Crawford and the businessman Rande Gerber. Kaia grew up with her brother Presley Gerber. She has attended Malibu High school and has not disclosed if she wants to go for any further education.

For launching Kaia into a professional modeling scene, luxury fashion brand Versace takes the credit with a special line for kids ‘Young Versace’. As she featured in ‘Teen Vogue’, she took the modeling industry by storm, and at the age of 13, it was an overwhelming achievement for her.

Soon after she was signed with a famed modeling ‘IMG models’, her modeling career really took off. When she acted in a movie called ‘Sister Cities’, she knocked on the doors of Hollywood in the year 2016. With her mother Cindy Crawford, she appeared on the cover of “Vogue Paris”.

Kaia has already worked with ace designers such as Miu Miu and Alexander Wang during the course of her brief career. Kaia’s gigantic fan following on social media platforms proves her popularity as an ultimate diva. She has become a popular face among the paparazzi as she keeps appearing at many red carpet events.

Talking about her dating life, Kaia Gerber has been dating him since 2017.

Here we provide you the list of Kaia Jordan Gerber’s favorite things.