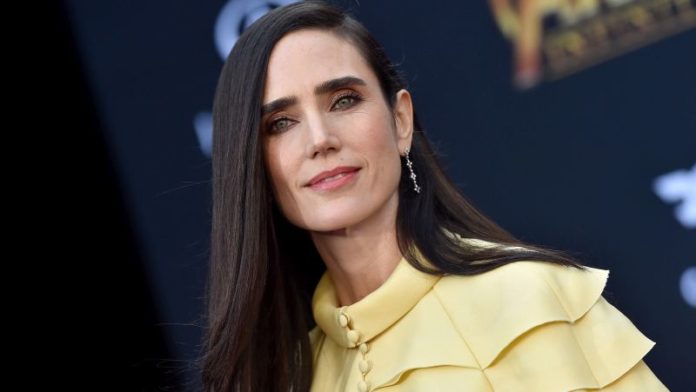 An American actress, Jennifer Connelly is famous for her hard work which she started out very young in the industry and made it very big. She possesses beauty since childhood and hence started child modeling at the age of 10 when her father’s friend suggested her parents to use her good looks for print and television commercials.

She was born as Jennifer Lynn Connelly on December 12, 1970. She received a major breakthrough from the movie ‘Requiem for a Dream’ which led her to lead roles in movies like ‘A Beautiful Mind’, ‘Blood Diamond’, etc. For her brilliant performance, she is honored with prestigious awards like Academy Award, Golden Globe and BAFTA.

Jennifer Connelly weighs 61 kg and 134 lbs in pounds. She stands with a height of 169 cm or in feet inches 5’6”. She looks beautiful in black color hair and sparkling green color eyes with thick eyebrows. Her figure measurement is 38-26-37 approximately. She turned 49 years old, in December 2019. She is being adored for her buxom figure and deep sultry voice.

From being a model to actress, she has accumulated the net worth of $20 million approximately.

Jennifer Connelly was born to a clothing manufacturer Gerard Connelly and an antique dealer Ilene Connelly. She was born in Cairo, New York and was raised in Brooklyn Heights. She attended Saint Ann’s school for elementary education. She was enrolled at Yale University for her graduation and later transferred to Stanford University.

Jennifer started her career as a model with Ford Modeling Agency and appeared on the cover of several magazines. She made her film debut in 1984 in a Hollywood movie, in ‘Once Upon a Time in America’. In 1985, she got her first lead role in the Italian horror movie, ‘Phenomena’ and ‘Seven Minutes in Heaven’.

In the romantic comedy ‘Career Opportunities’, she worked opposite Frank Whaley. She was involved with John Malkovich in the most controversial intimate scene in the movie ‘Mulholland Falls’. The movie ‘A Beautiful Mind’ became the most prominent movie in Connelly’s life because she won an Oscar, Golden Globe and BAFTA for it.

She played the role of Darwin’s wife in the drama biopic ‘Creation’ in 2009, which was based on Charles Darwin’s life. She has been appreciated for her performance in the movies like ‘Blood Diamond’, ‘Little Children’, ‘Reservation Road’, etc.

In 2003, she got married to Paul Bettany and the couple has a son named Stellan Bettany and a daughter named Agnes Lark Bettany. She has a son Kai Dugan from her relationship with David Dugan.

Here is the list of Jennifer Connelly’s favourite things. Some Interesting Facts About Jennifer Connelly