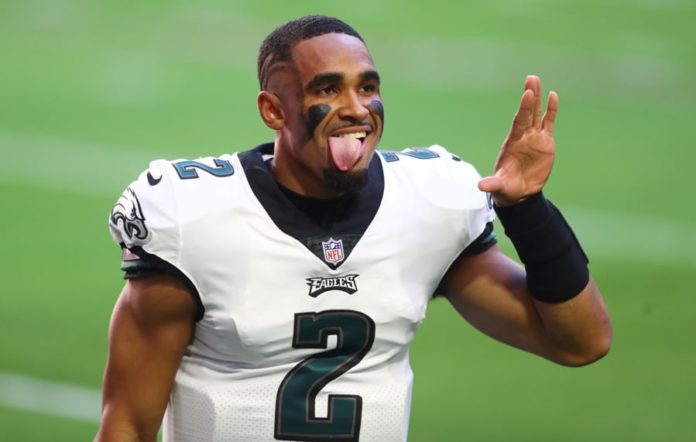 Success is the child of hard work, determination, and perseverance, this line has been very well proved by Jalen Hurts who is an American Football quarterback for the Philadelphia Eagles of the National Football League (NFL).

Moreover, he earned huge popularity when he was drafted by the Eagles in the second round of the 2020 NFL Draft. In fact, this renowned personality has become the Eagles’ starter near the end of the 2020 season and was named the full-time starter the following year.

Born on 7th August 1998, this handsome personality has turned 24 years old. He seems enough tall with his height which is 188 centimeters and 6’2” in feet & inches.

He seems very fit and healthy with a weight of 99 kilograms and 218 lbs in pounds. Moreover, he is very conscious about his physique and follows a regular and healthy diet in order to keep himself fit as a fiddle.

This renowned footballer, Jalen earns a very handsome amount of money throughout his professional career in the field of sports. Having started his career at a very early age, Hurts has managed to establish himself as one of the most successful footballers in the world. According to the sources, his estimated net worth is $1.5 million approximately.

Born and growing up in Houston, Texas, the United States, Jalen holds American nationality. He is the loving and caring son of Averion Hurts (Father) and Pamela Hurts (Mother). Moreover, he grew up with his two siblings named Kynnedy (sister) and Averion Jr. (brother).

As for his education, Jalen studied at Channelview High School in Texas where his father Averion was the football coach throughout his son’s high school career. Later, in December 2018, he completed his B.A. in communication and information sciences.

Moreover, throughout his high school career, he also played against the Texas A&M freshman standout running back Trayveon Williams. Later, in the year 2016, Hurts started as a freshman at Alabama Crimson Tide and played against USC Trojans. He completed the 2016 season with 36 overall touchdowns for Crimson Tide with a total of 35.

After that, he was declared as one out of the ten finalists for the Manning Award on 30th November 2016. Other than this, Jalen also led his team to win the 2016 SEC Championship over the Florida Gators on 3rd December 2016.

Thereafter, Hurts was named SEC Freshman of the Year and SEC Offensive Player of the Year and also got Freshman All-American from several publications. Besides this, he was featured on the cover page of “Sports Illustrated College Football Playoff” magazine on 6th December 2016.

Furthermore, Hurts led Tide to a 13–1 season, where they played against Clemson Tiger in the 2018 Sugar Bowl. Additionally, he was also benched at halftime of the 2018 College Football Playoff National Championship. In addition to this, Hurts announced via social media on January 16, 2019, that he would be transferring to the University of Oklahoma for his final year of eligibility.

He was eligible to play for the 2019 season as a graduate transfer. In fact, he shattered Oklahoma’s single-game yardage record in a debut putting up 508 yards of total offense against Houston in his first game as a Sooner on September 1, 2019.

After that, Jalen was selected by The Philadelphia Eagles in the second round, with the 53rd overall pick, of the 2020 NFL Draft. In his first NFL start, he completed 17 of 30 passing attempts for 167 passing yards and one touchdown, leading the Eagles to a 24–21 win.

Recently, Hurts was named the starter for the regular season by new head coach Nick Sirianni on August 31, 2021. He led the Eagles to a 32–6 victory in the season opener, on the road against the Atlanta Falcons, throwing for three touchdowns and a passer rating of 126.4.

Talking about his professional life, Jalen is quite private about his personal life so he never disclosed any information about his relationship status.

Here we are providing the list of favorites of Jalen Hurts: 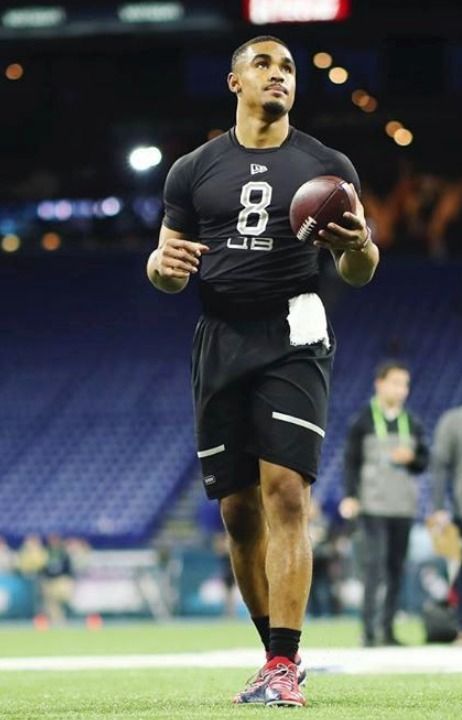 Some Interesting Facts About Jalen Hurts