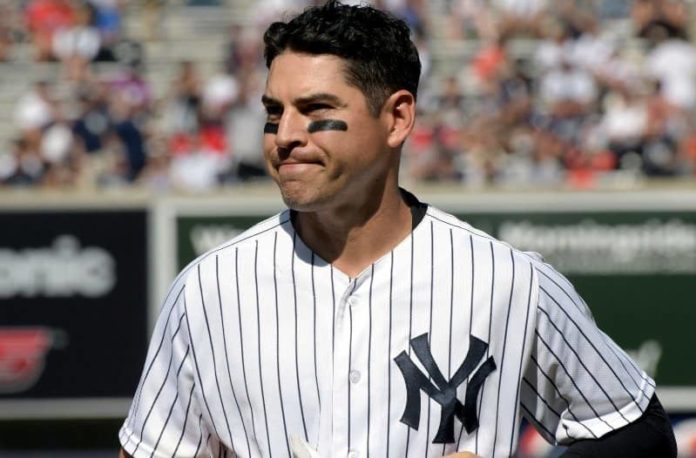 Baseball is ninety percent mental. The other half is physical and this quote brief sums up ‘Jacoby Ellsbury’ who is a free agent American professional baseball center fielder. He previously played in Major League Baseball (MLB) for the Boston Red Sox (2007-2013) and New York Yankees(2014-2017).

He is the first American Indian of Navajo descent who played Major League Baseball and became the first Red Sox player in history to be a member of the 30–30 club. He couldn’t play much baseball since 2017 as of his injuries. For his contribution to baseball, he received Gold Glove and a Silver Slugger Award.

Born on 11 September 1983, this handsome personality has turned 39 years old. He seems enough tall with his height which is 185 centimeters and 6’1” in feet & inches. He seems very fit and healthy with a weight of 88 kilograms and 194 lbs in pounds. He looks more elegant with his brown eyes and black hair.

Moreover, he is very conscious about his physique and follows a regular and healthy diet in order to keep himself fit as a fiddle with body measurements of 42 inches chest, 34 inches waist, and 15 inches biceps approximately.

Jacoby is listed among baseball’s highest-paid athletes for many years and has an estimated net worth of $50 million. He got around $21 million after he hasn’t played much in 2019.

Jacoby was born and raised up in Madras, Oregon, and belongs to the American-Indian ethnicity. He is born to his father Jim Ellsbury who worked as a forester for the “Bureau of Indian Affairs” and his mother Margie Ellsbury who was a descendant of the 19th-century tribal leader Granado Mucho.

He has been grown up with his three brothers named Spencer Ellsbury, Tyler Ellsbury, and Matt Ellsbury. As for his education, he completed his schooling at Madras High School and later attended Oregon State University for his higher education.

As per his career, he started his career on July 14, 2005with his debut match against the Lowell Spinners. He was the sixth-best prospect by Baseball America in the 2006 season. Jacoby was named to the Carolina League All-Star team in 2006.

He was promoted to the Portland Sea Dogs of the Class AA Eastern League on July 12, 2006. Jacoby was selected as Baserunner of the Year and the Minor League Defensive Player of the Year by the Red Sox.

He made his debut on June 30, 2007as a center field against Texas Rangers. In 2007, he was named MLB’s American League Rookie of the Month. He won his first-ever championship after winning the World Series with the Red Sox. In the 2008 Season, he was ranked the 13th-best prospect in baseball by Baseball America.

On April 22, 2008, he hit his first career multi-home run game against the Los Angeles Angels. In Baseball Awards 2009, he won Defensive Player of the Year in MLB. He collided with one of the players resulting in hairline fractures on April 11, 2010, for which he couldn’t play in the further 2010 season.

He became the first member of the Boston Red Sox to join the 30–30 club on September 25, 2011. He was voted the American League Comeback Player of the Year as well as won his first Gold Glove Award.

On August 28, 2013, he again suffered a compression fracture by fouling a ball. He became a free agent for the first time in his career after his contract expired on October 31, 2013.

He was signed officially to New York Yankees on December 7, 2013. He made a straight steal of home against Matt Moore on April 22, 2016, which marked the first time a Yankee ever successfully stole home. On April 28, 2017, he marked the 100th home run of his career and again faced the injury and was listed in the injury list.

Reflecting on his personal life, he is a married man who tied the marriage knot with Kelsey Hawkins in December 2012. The couple has been blessed with two children whose names are not known at this moment.

Here we are providing the list of favorites of Jacoby Ellsbury: Some Interesting Facts About Jacoby Ellsbury