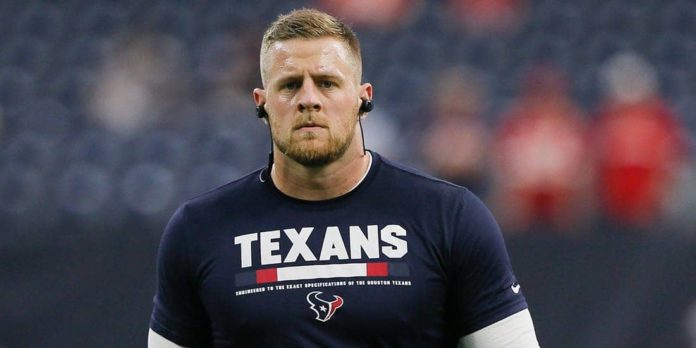 An American professional football player J.J. Watt is associated with the ‘Houston Texans’. Apart from football, he was also actively involved in hockey, basketball, baseball, and track and field events. He was born as Justin James Watt on March 22, 1989. Except for the 40-yard dash, J.J is a top performer in all categories who signed a contract with Houston Texans to enter National Football League.

He has earned numerous titles including NFL Defensive Player of the Year,’ the ‘Sports Illustrated Sportsman of the Year,’ and the ‘Walter Payton NFL Man of the Year.’ He is also involved in philanthropic activities and is the president of the Justin J. Watt Foundation.

The weight of J.J. Watt is 131 kg or 289 lbs in pounds. He has a gigantic build-up of 196 cm and in feet inches; his height is 6’5” tall. He will turn 33 years old. His hair color is light brown and eye color is striking blue. His body measurement is as follows 49 inches chest, 38 inches waist, and 18 inches biceps.

J.J. Watt’s net worth is estimated to be $35 million approximately. He signed a $100 million contract for six years with a salary of $20.9 million. He owns a Ford Truck and Audy RS 7.

J.J. Watt was born in Waukesha, Wisconsin, to Connie who was a building-operations vice president and John Watt was a firefighter. He is an elder brother to Derek and TJ Watt who also plays football. He attended ‘Pewaukee High School,’ where his sports journey began.

During his senior year, he won the Woodland Conference Player of the Year Award and was also named as the team’s ‘Most Valuable Player’ (MVP). He was enrolled at the University of Wisconsin-Madison where he was named as ‘Wisconsin’s ‘Scout Team Player of the Year.’

In 2014, he extended his contract with ‘Texans’ for 6 years worth for $100 million and became the highest-paid non-quarterback of the ‘NFL. In 2015, he was named to the ‘Pro Bowl’ and earned the title of the ‘Defensive Player of the Year’ award.

Here is the list of J.J. Watt’s favourite things. Some Interesting Facts About J.J. Watt