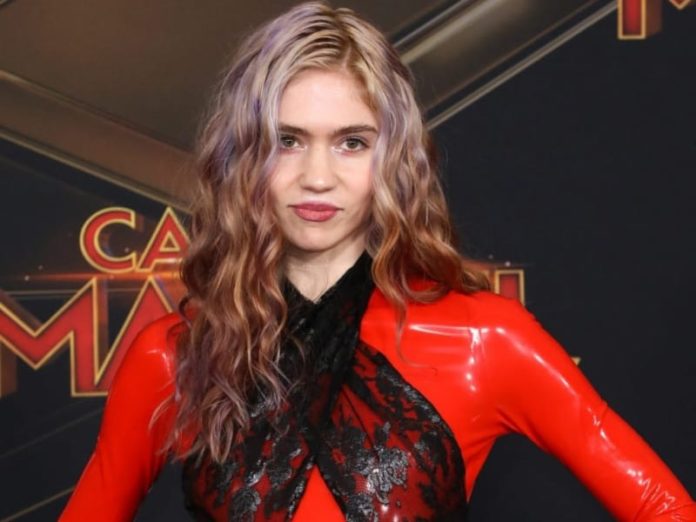 The backbone of success is determination, hard work, good planning, and perseverance, this line has been very well proved by Claire Elise Boucher, popularly known as Grimes who is one of the Canadian singers, songwriter, record producer, and visual artist.

Moreover, she gathered huge publicity in the year 2012 with the release of her third studio album, Visions for which she also won Electronic Album of the Year in 2013.  Recently, she came into the limelight on September 30, 2021, by releasing a new song titled “Love” which was recorded in response to her split from Elon Musk and the increased media attention from it.

Her beauty is enhanced by her hazel eyes and brown hair. She is very conscious about her health and maintains her figure with the measurement of 34 inches breast, 27 inches waist, and 36 inches hips. Her bra size is 33C while her shoe size is 6 (US).

This eminent singer, Grimes earns a very handsome amount of money through her professional career in the music industry. The major source of her income is her record sales, concerts, tours, and endorsements.

In fact, this stunning beauty has endorsed several brands, including her own merchandise. According to the sources, her estimated net worth is $3 million approximately.

Born and grew up in Vancouver, British Columbia in Canada, Grimes holds Canadian nationality. She was born to her mother named Sandy Garossino who is a former Crown prosecutor and arts advocate. However, she never disclosed the name of her father who is a former banker. Other than this, she also has a stepbrother, Jay Worthy.

As for her education, Grimes attended Catholic school. Furthermore, she relocated from Vancouver to Montreal to attend McGill University. However, she left school in the year 2011 before completing her double major degree.

Moving towards her career, Grimes started writing music in the year 2007 under the name Grimes. After that, in the year 2010, she independently released her debut album, Geidi Primes which was inspired by the Dune series. Later, her second studio album named Halfaxa was released in the year 2010.

Moreover, Grimes collaborated with DJ and producer Blood Diamonds in the year 2011. Thereafter, in the year 2012, she signed with the record label 4AD following her rising popularity. In the same year, this gorgeous singer released her third studio album, Visions which rose her to stardom.

In fact, Vision also got the Electronic Album of the Year Award and Grimes was nominated for the Breakthrough Artist of the Year at the Junos. The album’s second single, “Oblivion” also gathered critical acclaim and was produced into a music video co-directed by Emily Kai Bock and Grimes.

Furthermore, she posted to her Tumblr on December 17, 2013, that she had employed the services of Jay-Z’s management company, Roc Nation. Grimes premiered her new track “Go”, produced by and featuring Blood Diamonds on June 26, 2014.

It was also ranked number fourteen on their Best Songs of 2014 list by Rolling Stone which is an American monthly magazine that focuses on music, politics, and popular culture. Later, her self-directed video for a demo version of “REALiTi” was released from an abandoned album on March 8, 2015.

Additionally, Grimes and Bleachers released their collaboration, “Entropy” for the HBO TV show Girls on March 15, 2015. After that, she announced via a series of tweets to her fans on May 24, 2015, that her upcoming album would be “surprise” which was released in sometimes October.

In addition to this, she toured Asia and Europe with supporting act Hana on the Ac!d Reign Tour in the spring of 2016. She premiered on Tidal the high-budget futuristic music video of “Venus Fly”, starring herself and Janelle Monáe on February 2, 2017, for which she also won Best Dance Video for “Venus Fly” at the Much Music Video Awards.

Apart from that, this stunning beauty was featured on “Pynk,” the third single from Janelle Monáe’s album, Dirty Computer on April 10, 2018. After that, she was featured on “Love4Eva” by Loona from their EP Beauty & the Beat on May 30, 2018. She also made her appearance on Bring Me the Horizon’s “Nihilist Blues” from their sixth album, Amo.

Further, she released a special DJ mix on December 11, 2020, on iTunes celebrating Cyberpunk 2077 titled This story is dedicated to all those cyberpunks who fight against injustice and corruption every day of their lives! The album contained two new songs “Delicate Weapon” and “Samana”.

Recently, Grimes has signed with Columbia Records on March 5, 2021. Later, she made a cameo in Doja Cat’s music video for her song “Need to Know” in June 2021.

Moreover, in July 2021, it was also announced that Grimes alongside, Alanis Morissette, Rocsi Diaz, and Nick Lachey would be judges on a new singing competition series called Alter Ego, in which the contestants make the use of motion capture technology to portray themselves as “dream avatars”.

As of her relationship status, Grimes was in an on-and-off relationship with Devon Welsh, then lead vocalist of Majical Cloudz from 2007 to 2010. Moreover, the duo first to each other in the year 2007 at a first-year dorm party while studying at McGill University.

After that, in the year 2012, Boucher entered into a romantic relationship with electronic musician Jaime Brooks who supported her on the Visions Tour performing as Elite Gymnastics. However, their relation couldn’t last long and ended in the year 2018.

Later, Grimes started to date technology entrepreneur Elon Musk in the year 2018. The two met after discovering on Twitter that they both came up with the same pun relating to Rococo and the thought experiment Roko’s basilisk.

Furthermore, Boucher announced on January 8, 2020, that she was pregnant with her and Musk’s first child together. Thereafter, she gave birth to their son on May 4, 2020. Musk and Boucher announced that they had named their son “X Æ A-12” (pronounced “Ex Ay Eye” or ” Ex Ash A Twelve”).

However, it was also reported that the name violated the naming law in California, where this child was born. Later, Grimes announced on May 24, 2020, that the name was changed to “X Æ A-Xii”. Recently, in September 2021, Musk announced his and Boucher’s separation.

Here we are providing the list of favorites of Grimes: Some Interesting Facts About Grimes