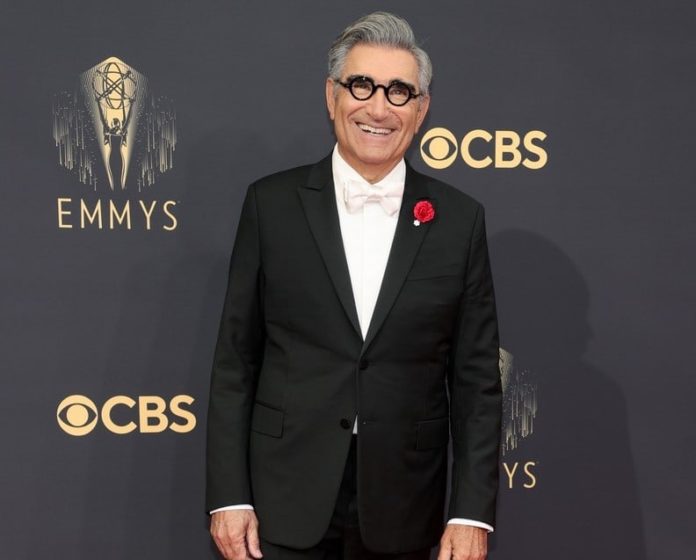 When your positive action combined with positive thinking, results in success, this line has been very well proved by Eugene Levy who has captured the hearts of millions of people with his talent in front of the camera.

He has been in blockbuster films and television shows such as Finding Dory, Bringing Down The House, Schitt’s Creek, Father Of The Bride II, and many others. He rose to prominence in the comedy genre with his portrayal of Noah Levenstein in the smash American Pie trilogy.

The legendary actor has also moved away from the camera to write, produce, and direct films and television programs. Among his numerous writing credits is For Your Consideration, Biographies: The Enigma of Bobby Bittman, and The Last Polka.

He has dark brown color eyes and dark black hair. Moreover, he is very conscious about his physique and follows a regular and healthy diet in order to keep himself fit as a fiddle.

His choice of career benefited him in gaining popularity among millions of people. Furthermore, this has enabled Eugene to earn money from a number of sources. He is thought to have a net worth of $20 million, however, he has not revealed his income.

Eugene was born and raised up in Hamilton, Ontario, Canada, and belongs to mixed ethnicity. His father worked as a foreman at a car company, while his mother was a homemaker. He went to Westdale Secondary School for his studies. He afterward attended McMaster University for his higher education.

As of his career, Eugene Levy was a regular on the sketch comedy series Second City Television, sometimes known as SCTV, from 1976 until 1984, portraying some of the show’s most memorable supporting roles. For SCTV News, he played Earl Camembert, a news anchor who became one of his most popular roles.

For his contributions to the program, he was nominated for multiple accolades and twice won the Primetime Emmy Award. He featured in a number of popular films and television episodes during the 1970s and 1980s, including Deadly Companion, Splash, Stay Tuned, and Armed and Dangerous.

He first featured in the American comedy film Father of the Bride in 1991, and four years later, he played a more major role in the sequel starring Steve Martin and Diane Keaton. Through his outstanding performance in the film, he established his authority as a comic. In 1996, he played Dr. Allan Pearl in the American mockumentary comedy film Waiting for Guffman.

He also wrote the film’s script. Following a series of supporting appearances in films such as Richie Rich’s Christmas Wish, The Secret Life of Girls, and Dogmatic, he was signed in the American teen sex movie American Pie. In the opening act of the film, he played Noah Levenstein, the protagonist’s naïve but loving father.

He delivered an outstanding performance, and his “cool dad” persona endeared him to the audience. He went on to repeat the part in all seven sequels to the original picture between 1999 and 2009 and was a major cause for the series’ overall success.

In the 2003 American comedy picture Bringing Down the House, he co-starred alongside his longtime buddy Steve Martin as Howie Rottman. He played Jimmy Murtaugh in the family comedy-drama film Cheaper by the Dozen 2. He has also provided vocal work in films such as Curious George, Over the Hedge, and Astro Boy.

In 2009, he portrayed Albert Einstein in the fantasy adventure film Night at the Museum: Battle of the Smithsonian. He was a voice artist in the animated picture Finding Dory, the sequel to Finding Nemo, with Ellen DeGeneres, Albert Brooks, Kaitlin Olson, Ty Burrell, and Diane Keaton. The film made moreover $1 billion worldwide, making it the highest-grossing animated picture of 2016, as well as the fourth-highest earning animated film of all time.

An actor is a family man who enjoys spending time with his loved ones. In 1977, he married Deborah Divine and they had a happy marriage. The couple has two children, a son named Daniel Levy and a daughter named Sarah Levy.

Here we are providing the list of favorites of Eugene Levy: Some Interesting Facts About Eugene Levy