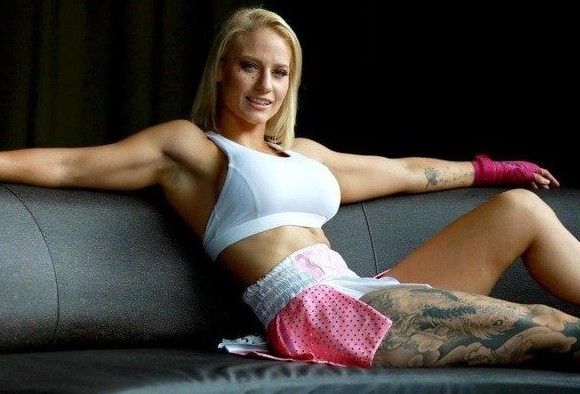 Ebanie Bridges is an accomplished professional boxer from Australia who has held the ANBF Australasian female super-bantamweight title since 2020. Because of her hair color and her instructor Arnel “Bomber” Barotillo, she has been well known as the “Blonde Bomber.”

She debuted in the ring on February 8, 2019, against Mahiecka Pareno, and won by Majority Decision. Bridges haven’t lost a match since that day. Previously, she competed in competitive bodybuilding for eight years under Arina Manta’s direction, winning multiple regional and state titles.

In addition, she holds a black belt in karate. She most recently won the ANBF Australasian Super Bantamweight Title. She won gold in the women’s bantamweight class in the 2016 and 2017 Australasian Golden Gloves, where she participated as an amateur.

Born on 1986-09-22, this gorgeous star has turned 36 years old. She seems enough tall with her growing height which is 155 centimeters and 5’1” in feet and inches. She seems very fit and healthy with a weight of 60 kilograms and 132 lbs in pounds.

Her figure measurements are 34 inches breast, 27 inches waist, and 36 inches hips. She looks lovely with her dark brown eyes and shiny blonde hair.

As of 2021, she has a net worth of between $1 million and $5 million, and she earns a magnificent salary in the thousands of dollars every year. In addition, her boxing profession is her primary source of revenue.

Ebanie was born and raised up in New South Wales, Australia, and belongs to the Australian-white ethnicity. There is no information available with regard to her parents but she has 2 siblings whose names are also not known.

As for her education, she graduated from Western Sydney University with a Bachelor’s degree in Mathematics and a minor in Physical Education, which was followed by her Master’s degree in Teaching.

As of her career, Ebanie Bridges began her professional career with a 26-4 amateur record from 2016 to 2018, during which time she won the National Golden Gloves Championships in 2016 and 2017, as well as the state bantamweight championships.

Ebanie played in the Australian Women’s Selection Tournament in Perth but was eliminated in the quarter-finals by Antonia Kay by a points-decision 4:1. Then, on November 24, 2018, she was supposed to battle Thai fighter Rungnapha Kaewrachang in a bantamweight bout at the Wollongong Fraternity Club, however, the fight was canceled owing to Kaewrachang’s fighting clearance concerns.

Instead, she competed in an exhibition fight against Bianca Elmir, which was not recognized as a professional match. Bridges made her professional debut on the undercard of Tim Tszyu vs. Denton Vassell on February 8, 2019, at the Hordern Pavilion in Sydney, where she faced Filipino boxer Mahiecka Pareno (2-1-0), whom Bridges defeated by majority decision.

Bridges defeated Laura Woods via TKO in the third round on October 12, 2019, and then defeated Kanittha Ninthim through TKO in the second round the following month. Bridges won a unanimous decision against Carol Earl for the vacant Australian National Boxing Federation super-bantamweight championship at Bankstown City Paceway in Sydney on March 13, 2021.

Ian Batty, Wayne Douglas, and Kevin Hogan scored the bout 80-72, 80-72, and 79-73 in Bridges’ favor. On the 14th of March, it was announced that Ebanie will fight Shannon Courtenay for the vacant WBA female bantamweight championship on the undercard of Conor Benn’s WBA Continental title defense against Samuel Vargas at the Copper Box Arena on the 10th of April.

Ebanie Bridges is a world-class fighter who is unmarried right now. She seems to be in a romantic relationship with her boyfriend. She expressed her love for him and how much her partner helps her in each and every possible way in an Instagram post on October 22, 2020.

Ebanie, on the other hand, has kept her personal life quite private on social media and has not revealed any information about her relationship.

Here we are providing the list of favorites of Ebanie Bridges: Some Interesting Facts About Ebanie Bridges