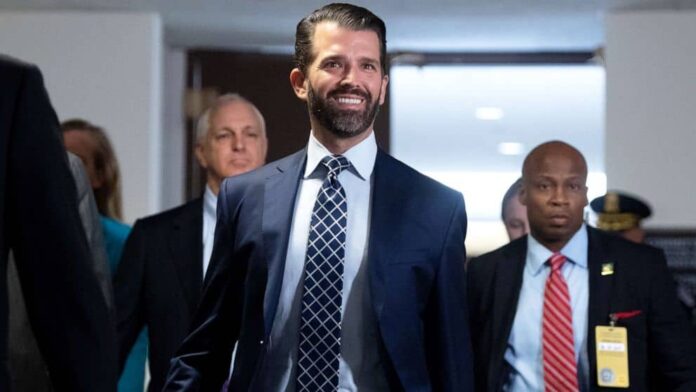 The eldest son of US President Donald Trump and his first wife Ivana, Donald Trump Jr. is a well-known American popular TV personality and businessman. When his father became the president he, along with his younger brother took over the family business. A tycoon in real estate business, he is one of the directors of the ‘Trump Trust’.

He does not hold any official post in the White House like his sister and brother-in-law, but handles a major part of the family business and is planning to expand his family hotel business.

He also takes interest in politics and stays active in the ‘Republican Party,’ campaigning for candidates, organizing fundraising events, and coordinating with the national committee. He has delivered speeches throughout the US and in international conferences and has proven to be a good speaker over the years.

Born on 31st of December 1977 Donald Trump Jr. will turn 43 years old in the year 2020. He appears to be tall, slim and keeps himself in a good shape. His height measures 5 feet 10 inches while his weight is 73 kg and he wears number 9 in the shoe size. He has black colored eyes and the color of his hair is black as well.

As the son of the US President Donald Trump Jr. has been looking after his father’s business for quite some time. He has earned a name for himself and is a well-known TV personality as well. He belongs to one of the richest families in the United States and the total net worth estimated for Donald Trump Jr. is between $40 million to $50 million US dollars as of now.

Donald Trump Jr. was born and raised in New York City, United States of America. The son of Donald Trump and Ivana Trump, he grew up with a brother and sister. He has studied at Buckley School and Hill’s School and later attended Wharton School, the University of Pennsylvania.

Supervising the development of ‘Trump Place’ a complex in West Side, Manhattan Donald Trump Jr. joined his father’s business at the ‘Trump Organization’ in the year 2001. He later was given the responsibility of overseeing three key projects. On many episodes of the television show ‘The Apprentice’, he appeared as a guest adviser and judge from 2006 to 2015.

He was given the responsibility of acquiring new projects and developing properties after he became the executive vice president of the ‘Trump Organization’. He took up the challenge of handling the campaigns along with his brother and sister when his father decided to run for US president in 2016.

He had influenced his father in choosing Ryan Zinke as the US Secretary of the Interior according to the ‘Wall Street Journal. In documentary films ‘You’ve Been Trumped’ (2011) and ‘You’ve Been Trumped Too’ (2016) his appearances were well received. Trump Jr. has also hosted the popular business show ‘21st Century Television,’ an award-winning business show.

He has been criticized for his statements and tweets on several occasions. For their role in their father’s inauguration, Trump Jr. and his younger siblings under investigation by The United States Attorney for the District of Columbia.

He was married to Vanessa Trump in the year 2005 but the couple is not together as of now. Vanessa and Trump Jr. have five children together two daughters and three sons.

Here we provide you the list of Donald Trump Jr.’s favorite things.