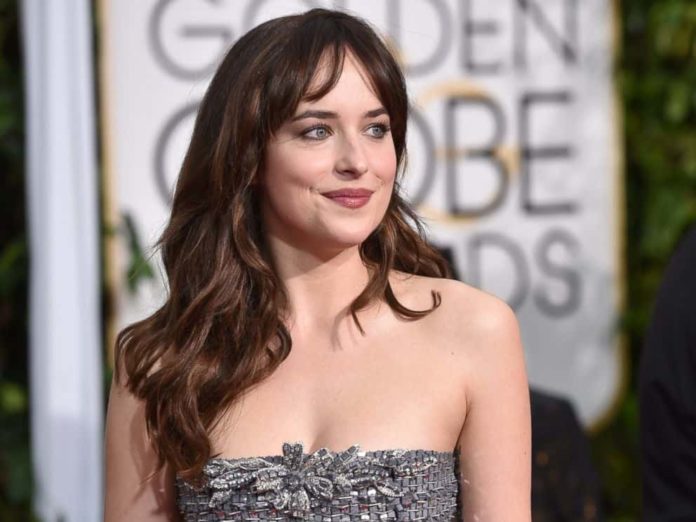 An American actress and model Dakota Johnson is the People’s Choice Award winner for playing the lead role in the blockbuster hit erotic-romantic-drama film ‘Fifty Shades of Grey’. She was born Dakota Mayi Johnson on October 4th, 1989.

She inherited her acting skills and talent from her family who is involved in the entertainment industry for a long time. In 1999, at the age of 10, she made her on-screen debut with the film ‘Crazy in Alabama’ which was directed by her stepfather Antonio Banderas. She worked in the film along with her mother and half-sister Stella Banderas.

Before taking a huge step in Hollywood, she began with modeling by signing with IMG Models. While completing her high school graduation she commenced her acting career by signing with William Morris Agency. In 2010, the American biographical drama film ‘The Social Network’ was marked as her first box-office hit.

Her success was followed by blockbuster films like ‘Beastly’ and ‘21 Jump Street’. Her major breakthrough came with the main role of Anastasia Steele in the film ‘Fifty Shades of Grey’, which helped her garner international recognition. The films like ‘Black Mass’ and ‘How to Be Single’ and the TV series ‘Ben and Kate’ are also some of the films included in her success list.

Dakota Johnson has a slim build type and weighs 54 kg and 119 lbs in pounds. She stands with a height of 172 cm or in feet inches 5’8”. She looks beautiful in brown color hair and sparkling blue color. Her figure measurement is 34-24-34 approximately.

She turned 33 years old. Her shoe size is 8 (US) whereas her dress size is 2 (US). She carries an attractive smile with a charming personality. It is noticed that there is a little gap in her front teeth.

According to the sources, Dakota Johnson’s estimated net worth is $5 million approximately. From her brilliant work, she is earning a considerable income and she is living a luxurious life with her earnings.

Dakota Johnson was born in Austin, Texas to actor parents Don Johnson and Melanie Griffith. Her parents had an on-off relationship until 1996. After their divorce, her parents got re-married and Dakota has six half-siblings. She attended the Aspen Community School in Aspen, Colorado for elementary education.

Later, she spent her freshman year of high school at the Santa Catalina School in California and then took a transfer to New Roads School in Santa Monica, California. Since childhood, she was a dancing enthusiast and developed an interest in modeling at the age of 12. She participated in a photo shoot for Teen Vogue along with other children of different celebrities.

As a child artist Dakota Johnson made her debut in the American comedy-drama ‘Crazy in Alabama’. In 2006, she became the first second-generation Miss Golden Globe in the history of the annual Golden Globe Awards after her mother. Before dealing with big film projects she started with modeling for the jeans line of MANGO brand.

In 2011 she traveled to Sydney in Australia to film the ‘Rising Star’ campaign for ‘Wish’ fashion label. She appeared in the critically and commercially successful 2010 American biographical drama film ‘The Social Network’ which won several awards including three Oscars.

Here is the list of Dakota Johnson’s favorite things. Some Interesting Facts About Dakota Johnson