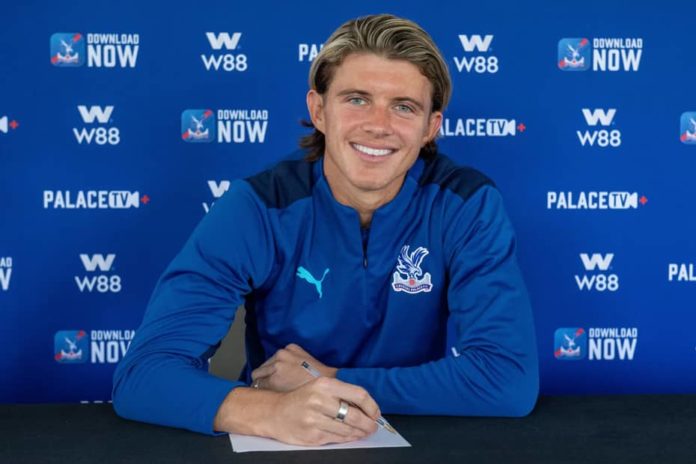 The recipient of Chelsea’s Academy Player of the Year for the 2018-19 season, “Conor John Gallagher”, renowned as Conor Gallagher is an English football player who plays as a midfielder for the Premier League club, Crystal Palace.

Born on 6 February 2000, this handsome footballer turns 22 years old.  He seems enough tall with his height which is 182 in centimeters and 5’11” in feet & inches. He maintains himself very fit and healthy with a weight of 70 in kilograms and 154 lbs in pounds.

Moreover, he is very conscious about his physique and follows a regular and healthy diet in order to keep himself fit as a fiddle with the body measurements of 40 inches chest, 30 inches waist, and 14 inches biceps approximately.

He earns from his professional career as a football player and his net worth is estimated at around £2 million.

Conor was born and raised up in Epsom, England, and belongs to the white ethnicity. He is born to his father Lee Gallagher and his mother Samantha Gallagher. He has been grown up with his three older brothers, Dan, Jake, and Josh. As of his education, he completed his education at Howard of Effingham School.

As of his career, he started his career from his hometown club, Epson Eagles, and then joined the English club, Chelsea academy. In October 2018, he signed a contract with the club moving through the youth ranks of Chelsea and the contract would keep him until 2021. In 2018, he was promoted to the club’s first team.

In the 2019 UEFA Europa League Final, he was an unused substitute for Chelsea where they won the title. For the 2018-19 season, he was awarded Chelsea’s Academy Player of the Year and signed a new 3-year contract with Chelsea in August 2019.

At various levels, he represented England national teams at England U17, U18, U19, U20, and U21 national teams. Conor was part of the England U17 team which won the 2017 FIFA U17 World Cup. Through his family heritage, he is eligible to represent England, Scotland, or the Republic of Ireland. In November 2021, he received his first call-up to the England senior team.

As of his personal life, he is not married yet but he is in a relationship with Irish model, Aine May Kennedy.

Here we are providing the list of favorites of Conor Gallagher: Some Interesting Facts About Conor Gallagher