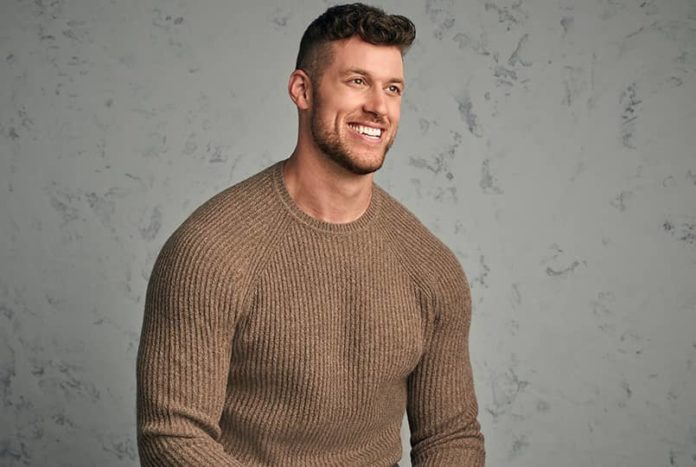 Hard work, determination, and persistence are the essential ingredients in the recipe of success, this line has been very well proved by Clayton Echard who is an American sales professional, TV personality, and former football player with a wide range of skills. After being cast in season 18 of “The Bachelorette,” he shot to huge fame.

He is also well-known as the star of “The Bachelor” season 26. Since July 2016, he has worked as a sales representative for Stryker Corporation, a medical equipment manufacturer.

He began playing football in sixth grade and was a member of the varsity football team’s defensive line during his final year. At the outset of his freshman year at the University of Missouri, he was picked as a walk-on member of the Missouri Tigers football team.

Moreover, he is very conscious about his physique and follows a regular and healthy diet in order to keep himself fit as a fiddle with the body measurements of 42 inches chest, 33 inches waist and 15 inches biceps approximately.

As of 2022, he has a net worth of $2 million, however, the amount of his income has not been revealed. In addition, his sales representative and previous football player careers provide him with a significant amount of money.

Clayton was born and raised up in Eureka, Missouri, U.S. and belongs to American-white ethnicity. He is born to his father Brian Echard and his mother Kelly Duff Echard. Moreover, he also has two brothers named Nate and Patrick.

As of his education, Clayton graduated from Eureka High School in 2011 and holds a bachelor’s degree. He went on to the University of Missouri to study health sciences with majors in Spanish and business, earning a bachelor’s degree in 2015.

As of his career, Clayton Echard began playing football in the sixth grade and was a defensive lineman for the varsity football team during his senior year at Eureka High School, after which he was picked as a walk-on member of the Missouri Tigers football team at the start of his freshman year.

He redshirted his rookie year and appeared in one game during the 2012 season, earning him a spot on the SEC academic honor roll. At the start of the 2013 season, he was shifted from defensive end to tight end, and he appeared in 12 games, with one assisted tackle.

During the 2014 season, he appeared in all 14 games at both offensive and defensive positions before settling on a tight end, where he played throughout the 2015 season. He signed with the Seattle Seahawks as a tight end in July 2016 but was released in September 2016.

Since July 2016, he has worked as a sales representative for Stryker Corporation, a medical device firm, and he has also been on Michelle Young’s season of “The Bachelorette.” He was originally identified as a prospective contender for the season in July 2021, among 34 other males. He came in ninth place overall.

Echard was cast as the star of season 26 of “The Bachelor” in September 2021, according to “Variety” and other reports. He addressed fans of the brand in his hometown on September 16th, stating he was “happy” and “a bit nervous.” On November 30th, 2021, ABC officially confirmed him.

Clayton Echard is seemed to be single and is currently not married yet. There isn’t much information regarding his personal relationship and partner because he keeps his personal life and media apart.

Here we are providing the list of favorites of Clayton Echard: Some Interesting Facts About Clayton Echard