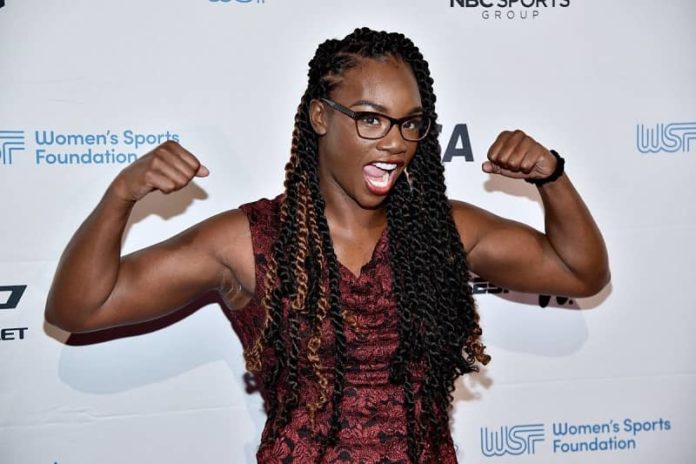 Nothing is impossible with hard work, dedication, and perseverance, this line has been very well proved by Claressa Maria Shields, better known as Claressa Shields, who is a professional boxer and mixed martial artist from the United States.

Shields, regarded as the finest active female light middleweight fighter in the world who has the record for becoming a two-weight world champion in the shortest number of professional matches.

She is the only boxer in history to have won each of the four major world championships. She also won two Olympic gold medals in the women’s middleweight class, making her the first American woman to do it in boxing.

Born on 17 March 1995, this renowned personality has turned 27 years old. She is blessed with a perfect height which is 173 centimeters and 5’8” in feet & inches. She seems as fit as fiddle with a weight of 70 kilograms and 154 lbs in pounds.

Her beauty is enhanced by her dark brown hair and black eyes. She is very conscious about her health and maintains her figure with the measurement of 35 inches breast, 27 inches waist, and 36 inches hips.

Her battles bring in a lot of money for her and contracts, pay, victories, sponsorships, and endorsements are all sources of money for her. She is also a professional MMA fighter with the Professional Fighters League. She earns a living through her fighting profession. Her net worth is now believed to be at $4 million.

Claressa was born and raised up in Flint, Michigan in the United States and belongs to the African-American ethnicity. She is born to her father Bo Shields and her mother Marcella Adams.

She has been grown up with her brothers named Dusable Lewis, Artis Mack, and her sister Briana. As for her education, she didn’t reveal any information with regard to her educational qualifications.

As of her career, Claressa Shields learned to box from her father. Her father was a boxer who competed in underground leagues. Shields’ father initially refused to allow her to pursue boxing, but when she was 11 years old, he relented. At Berston Field House in Flint, she began her training with Jason Crutchfield.

In 2011, she competed in her first open-division competition, the National Police Athletic League Championships, after winning two Junior Olympic titles. She was crowned middleweight champion. She was awarded the best combatant overall. She has a professional boxing record of 77 wins and 1 defeat as an amateur.

Shields began his professional career in November of 2016. She defeated Franchon Crews-Dezurn in her maiden professional fight. In March 2017, she won the American Boxing Federation middleweight championship by defeating Szilvia Szabados. In June 2017, she won a decision against Sydney LeBlanc.

In January 2018, she successfully defended her WBC and IBF female super middleweight belts, as well as winning the WBAN super-middleweight title by defeating Tori Nelson. In her professional career, it was the first time she had completed all ten rounds. Coach John David Jackson was her first coach.

In June 2018, she defeated Hanna Gabriel for the vacant WBA and inaugural IBF middleweight belts. During Round 1, she had her first professional knockdown. In 2018, she was inducted into the Hall of Fame of the USA Boxing Alumni Association.

The 2018 Christy Martin Award – Female Fighter of the Year was given to her by the Boxing Writers Association of America. In April 2019, she became the undisputed world champion in the women’s middleweight division, unifying the WBA, WBC, IBF, and WBO middleweight championships, as well as The Ring magazine’s inaugural middleweight title.

Christina Hammer was defeated by a unanimous decision. In January 2020, she defeated Ivana Habazin to capture the vacant WBO junior middleweight title, becoming the fastest woman in history to win titles in three categories.

In March 2021, she defeated Marie-Eve Dicaire to retain her WBC and WBO super welterweight belts, as well as the vacant WBA light-middleweight crown and the IBF 154-pound belt. She began her MMA career in 2020, in addition to her boxing career. In November 2020, she signed a three-year contract with the Professional Fighters League.

She began her Brazilian Jiu-Jitsu training. Roberto Alencar, the IBJJF no-gi World Champion, was her coach. In late 2020, she began training at JacksonWink MMA. In June 2021, she made her MMA debut at PFL 4.

She made her professional debut against Brittney Elkin in round three, winning by TKO. On October 27, 2021, she was defeated by Abigail Montes in a split decision at PFL 10. It was her second MMA bout in her professional career.

Here we are providing the list of favorites of Claressa Shields: Some Interesting Facts About Claressa Shields