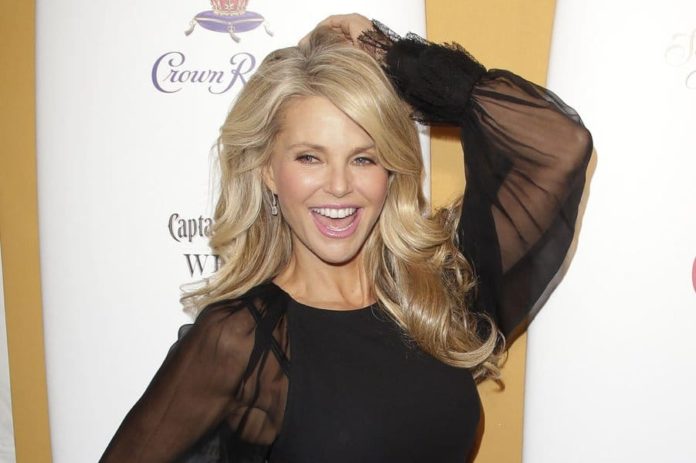 Christie Brinkley is an American model and actress is known for being the longest-running face of the American cosmetics company ‘CoverGirl’. She has been the first model to appear on the three consecutive ‘Sports Illustrated Swimsuit’ Issue covers.

She has been associated with this glamorous industry for over 30 years and has appeared in several television shows as well as in films. Her notable works include ‘Mad About You’, ‘Vegas Vacation’, ‘Jack and Jill’, and ‘Parks and Recreation’.

As a businesswoman, she has also established her own chain of businesses in different domains like real estate, eyewear, hair extensions, and beauty products. To date, she has been featured in over five hundred magazine covers and worked for many top brands as a model.

Christie Brinkley weighs 64 kg and 141 lbs in pounds. She is an attractive model with a towering height of 175 cm or in feet inches 5’9” tall. She has wavy blonde hair color and sparkling wide blue color eyes.

She has a slim physique with a figure measurement is 37 inches breast, 25 inches waist, and 35 inches hips approximately. She has turned 68 years old. Her bra size is 34C whereas her dress size is 6 and her shoe size is 8 (US).

According to the sources, the estimated net worth of Christie Brinkley is $110 million USD approximately. Her impressive appearance in magazines and movies series is a major source of income for her.

Born on February 2, 1954, the birth name of Christie Brinkley is Christie Lee Hudson. She is the only daughter of Herbert Hudson and Marjorie. She grew up in Monroe, Michigan with her brother Greg Brinkley.

Her parents parted their ways and later her mother got married to television writer Don Brinkley. She went to Paul Revere Junior High School for her elementary education. For further studies, he attended Le Lycée Français de Los Angeles and also went to Paris to study art.

While studying in Paris, Christie Brinkley grabbed the attention of American photographer Errol Sawyer in a post office. He helped her make the portfolio and introduced her to John Casablancas who is the founder of the Elite Model Management agency. From this point, her life turned rapidly.

Later, she met renowned fashion photographers Patrick Demarchelier and Mike Reinhardt who introduced her to Eileen Ford, the co-founder of Ford Models. She visited California to meet Nina Blanchard, an associate of Eileen Ford and grabbed three national advertisement campaigns.

She started her modeling career by appearing on the cover of ‘Glamour,’ a women’s magazine, and was featured multiple times. She also appeared in their ‘40th Anniversary Issue’s Hall of Fame’ as well as ‘50th Anniversary The Legends’ specials.

She has represented top brands like ‘Nissan’, ‘Revlon’, ‘Yardley of London’, ‘MasterCard’, ‘Diet Coke’, ‘Anheuser-Busch’, and ‘Black Velvet’. She has earned immense popularity from the glamorous industry and entered the show business as well. She was featured in ‘National Lampoon’s Vacation’, and ‘Vegas Vacation’.

As a businesswoman, she owns a chain of businesses through her umbrella company CB Inc. She runs a business of beauty products, eyewear, sparkling wine, real estate, as well as hair extensions.

Christie Brinkley has been married four times and has been involved in multiple relationships. From 1973-1981, she was married to Jean-François Allaux. Then, she married musician Billy Joel and has a daughter named Alexa Ray Joel.

Only for a year, she was married to Richard Taubman and has a son, Jack Paris Brinkley. Lastly, she got married to an architect Peter Halsey Cook in September 1996. The couple has a daughter Sailor Brinkley-Cook. Their twelve-year-long marriage also ended with a divorce. Some Interesting Facts About Christie Brinkley