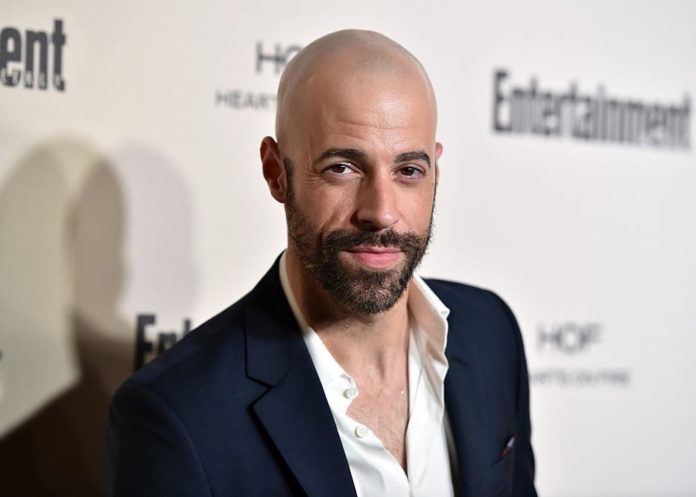 You have to take the stairs of hard work in order to get success, this line has very well proved by Chris Daughtry who is an American singer, songwriter, and actor.

Moreover, he is best known to be the lead vocalist and rhythm guitarist for the rock band, “Daughtry” which made their debut with the release of their self-titled debut album that became the fastest-selling debut rock album in Nielsen SoundScan history.

Besides this, Chris also rose to huge fame to be one of the final contestants on the 5th season of “American Idol” finishing in fourth place.

Born on December 26, 1979, this handsome singer has turn 41 years old in the year 2020. He seems enough tall with his height which is 170 in centimeters and 5’7” in feet & inches. He maintains himself very fit and healthy with a weight of 83 in kilograms and 183 lbs in pounds.

Chris earns a very good amount of money through his professional career as a singer, songwriter, and actor. According to the sources, his estimated net worth is $8 million approximately.

Daughtry gathered huge popularity with his appearance on “American Idol” which has led him to become one of the popular singers in the rock genre alongside his band.

Born in McLeansville, North Carolina, United States, Chris belongs to the White ethnicity. He was born as one of the two sons of his parents; James Daughtry(father) and Sandra(mother). Moreover, he grew up in Lasker alongside his brother, Kenneth until the age of 14, and then in Palmyra, Virginia.

As of his education, Chris studied at the Fluvanna County High School in Palmyra, from where he got graduated in 1998. Other than this, Daughtry developed an interest in music while growing up and he already had started taking singing seriously as a musician by the age of 16.

He started to take guitar lessons from blues-rock guitarist Matt Jagger and also performed with rock bands during his time in high school.

Moving towards his career, Chris took the first step towards his career as the lead vocalist for his high school band, “Cadence”. Moreover, in the year 1999, they released their only album, “All Eyes on You”. Later, in the year 2005, he also performed as a lead singer and guitarist for the band, “Absent Element” and released the album, “Uprooted”.

After that, he auditioned singing “The Letter” for the 5th season of “American Idol”. He achieved much appreciation and praise for his performance of Fuel’s “Hemorrhage(In My Hands)” by making him up to the top 4. Furthermore, Daughtry performed “Mystery” with the band Live at the Kodak Theater on the finale night.

Besides this, he also gave his outstanding performance, “Wanted Dead or Alive” in The Ellen DeGeneres Show. Later, he formed a band named after his last name currently consisting of members, Brian Craddock, Josh Steely, Robin Diaz, and Andy Waldeck.

The band released their debut self-titled album which charted no. 1 on the Billboard chart on November 21, 2006. In fact, the band’s song, “Home” got huge popularity as it was played on every episode of American Idol’s sixth season’s results show.

Apart from that, Daughtry performed at the 2007 Indianapolis 500 on May 27, 2007. After that, the band released their second album titled “Leave This Town” with its single, “No Surprise” on July 14, 2009. Chris made history by becoming the first American Idol alumnus to have two consecutive number one albums.

Additionally, this talented star has written and recorded a song for the soundtrack to the video game, “Batman: Arkham City”. Thereafter, they released their third album titled “Break the Spell” on November 21, 2011. Other than this, on November 19, 2013, the band’s fourth album, Baptized, was released.

Later, Chris released their first greatest hit album, “It’s Not Over…The Hits So Far” on February 12, 2016. Further, they released their fifth album, “Cage to Rattle” on July 27, 2018. Apart from singing, Chris also made his acting debut in the 100th episode of “CSI: New York”.

Then, in the year 2016, he portrayed Judas Iscariot in the Biblical live version of The Passion. He also finished as the runner-up on the second season of “The Masked Singer” on December 18, 2019. Recently, in the year 2021, Chris portrayed Hugo Strange in the Batman fan film, Batman: Dying Is Easy.

Talking about his relationship status, Chris is a married man who has been married just once to date. He tied the sacred knot of marriage with Deanna Daughtry on November 11, 2000. In fact, the duo has been living together for over 21 years now. This lovely couple first met each other while attending a party.

Besides this, after 10 years of marriage, they welcomed 2 children together, a twin Adalynn Rose and Noah Jame in November 2010. He also parents his stepchildren, Hannah and Griffin from Deanna’s previous relationship. Unfortunately, Daughtry’s elder step-daughter, Hannah, died unexpectedly on November 12, 2021.

Here we are providing the list of favorites of Chris Daughtry: Some Interesting Facts About Chris Daughtry