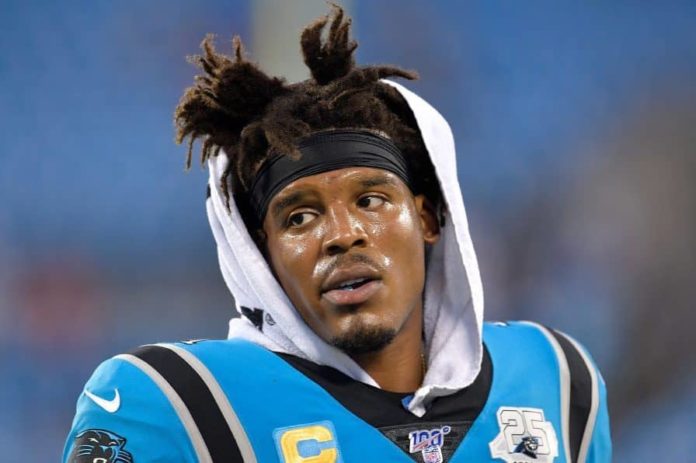 Cam Newton, the American Football player who managed to become MVP even after multiple injuries, surgeries, an arrest and a life-threatening accident, calls himself an example of why people deserve second chances. Winning a National Championship and the Heisman trophy and getting drafted into the NFL within a one year span is his lifetime achievement and he is the only person ever to do so.

All-time records were broken by him within his rookie year for passing and rushing yards.  Throwing for at least thirty touchdowns along with rushing for ten in the same season, he became the first quarterback in the entire history of NFL to achieve it.

Cam Newton is currently 33 years old and was born on 11 May 1989. He has a towering height of 6’ 5” and weighs 111 kg. His body is muscular and toned and measurements include his chest which is 50 inches, waist 36 inches, and biceps are 17 inches.

His height and muscle give him a distinct advantage in-game. Cam has black-colored eyes as well as hair.

Newton has developed an estimated net worth of $60 million after playing football for years professionally. Cam owns a luxury Condominium in Charlotte, the U.S. his car collections include a vintage 1970 Oldsmobile 442 and a Ferrari F12.

Born in Atlanta, Georgia, to Cecil and Jackie Newton, Cam was the second of three sons. While growing up with his brothers, Cecil Newton Jr, and Caylin Newton, Cam was exposed to a variety of sports at a young age by his father.

Number one quarterback from either high school or junior college ranked by Rivals.com, Cam led his team to the 2009 NJCAA National Football Championship when transferred to Blinn College in Brenham, Texas. Later he moved to Auburn University and led them to the 2010 BCS National Championship.

He signed a four-year contract with the Carolina Panthers after being drafted into the NFL in 2011and became the very first rookie quarterback in the history of NFL. He broke the record of Peyton Manning as a rookie with throwing for around 400 yards in the regular-season opener in NFL. Ranked as the top player in the NFL on the ‘NFL Top Players of 2016 list’, he had become MVP in the previous year itself.

Here we provide you the list of Cam Newton’s favourite things. Some Interesting Facts About Cam Newton