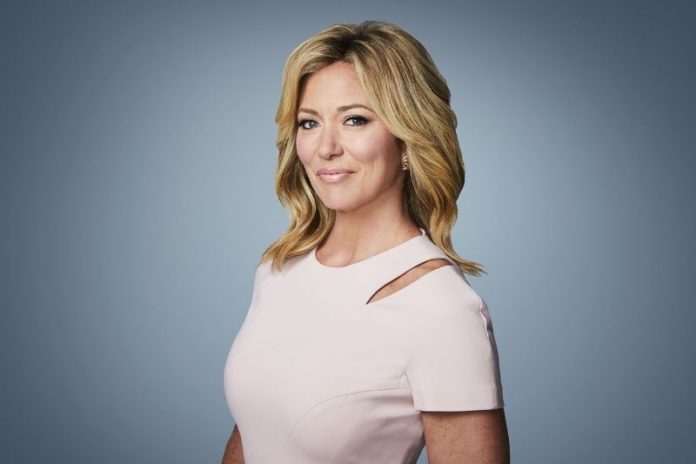 Success is what you do with your ability. In fact, it’s how you use your talent and Brooke Baldwin is one of those personalities who has achieved huge success by using her talent. She is an American journalist and television host who is eminently known as the host of “CNN Newsroom”.

Recently Brooke came into the limelight in April 2021 when she published her first book, Huddle: How Women Unlock Their Collective Power in which she interviews multiple women including Stacey Abrams, Ava DuVernay and Gloria Steinem about the power women have when they join together.

Born on July 18, 1980, this gorgeous personality has turned 43 years old. Her height measures 178 centimeters and 5’10” in feet & inches. Being a journalist, she is very conscious about her physique and figure and takes care of her weight which is 67 kilograms and 148 lbs in pounds.

She maintains herself with the figure measurements of 36 inches breast, 27 inches waist, and 36 inches hips. She has a beautiful doll-like face which is complemented by her blue eyes and blonde hair. Her bra size is 34B while her shoe size is 8.5 (US).

With this stunning beauty, Brooke earns a very decent amount of money through her professional career as a news anchor. Moreover, she has managed to amass a million worth of fortune from her several coverings and shows by working in this field for more than a decade. According to the sources, Baldwin’s estimated net worth is $1.3 million approximately.

Born and growing up in Atlanta, Georgia, United States, Brooke belongs to the White ethnicity and is of Anglo-Saxon descent. She is the loving and caring daughter of Steven Robert Baldwin (father) and Christine King Fulton (mother).

However, her mother died because of cancer when she was just 12. Brooke’s mother was a teacher while her father worked as a consultant at Deloitte. As for her education, she enrolled at The Westminster Schools.

Moving towards her career, Brooke took the first step towards her career in the year 2001 when she was hired at WVIR-TV in Charlottesville, Virginia. Later, she served as the morning anchor at WOWK-TV, and then she became a lead reporter at WTTG in Washington.

After that, she led the coverage of the shooting massacres at both the ‘West Nickel Mines School’ and ‘Virginia Tech’. Besides this, in the year 2008, she got her breakout career after she joined CNN. Moreover, this versatile lady joined Headline News (HLN) networks, a CNN-owned news channel, and also gave her contribution to the channel’s award-winning coverage of the 2008 presidential election.

Furthermore, Baldwin co-anchored and led the CNN exclusive coverage of the final launch of ‘Space Shuttle Atlantis'(STS-135) from the ‘Kennedy Space Center’ in the year 2011. In the following year, she released her documentary, ‘To Catch a Killer,’ which even achieved the “Silver World Medal” for the “Best Investigative Report” at the New York Festivals International Television & Film Awards.

After that, she presented the live coverage of the ‘Golden Globe Awards’ red carpet in the year 2013. In fact, Brooke also covered the then-president Barack Obama’s second presidential inauguration in the same year. Other than this, she covered the incident of the New York protests and the Boston Marathon.

Later, in the year 2015, Baldwin was made a ‘Peabody Award’ finalist for her conference on gun violence in Washington, DC. She was also featured in “Brooke Baldwin Gives Surprising Boost to CNN” in the year 2015 by Variety magazine.

Besides this, she reported live from Orlando, Florida covering the victims and survivors of the Orlando nightclub shooting in the year 2016. In the same year, she also presented an award at L’Oréal Paris’s 11th Annual Women of Worth Celebration. Apart from that, this renowned lady covered the presidential inauguration of Donald Trump on January 20, 2017.

Later, in the year 2018, Brooke and her co-anchor, Jake Tapper covered the historic government shutdown from ‘Capitol Hill’. In the same year, CNN launched her eight-part digital video series, ‘American Woman’ which she hosted as herself featuring several celebrities including Betty White, Sheryl Crow, and Ava DuVernay.

In addition to this, Brooke also hosted CNN’s “New Year’s Eve Live” with her co-anchor, Anderson Cooper along with her regular show, “CNN Newsroom”. However, she left the ‘CNN Newsroom’ midway in January 2019 leaving the audience surprised because of an ocular migraine attack.

In fact, she was invited as a speaker at Harvard University on April 8, 2019. Recently, Baldwin announced on February 16, 2021, that she would leave CNN in mid-April.

Talking about her relationship status, Brooke is a married personality who is married to her long-time boyfriend, English producer James Fletcher. Moreover, the duo met for the first time at a holiday party in 2015.

In fact, she made her relationship official by getting engaged in July 2017. Thereafter, this lovely couple tied the sacred knot of marriage in May 2018 at a wedding held at Hudson Valley, New York City. As of now, she is living a happy and blissful life with her beloved.

Here we are providing the list of favorites of Brooke Baldwin: Some Interesting Facts About Brooke Baldwin