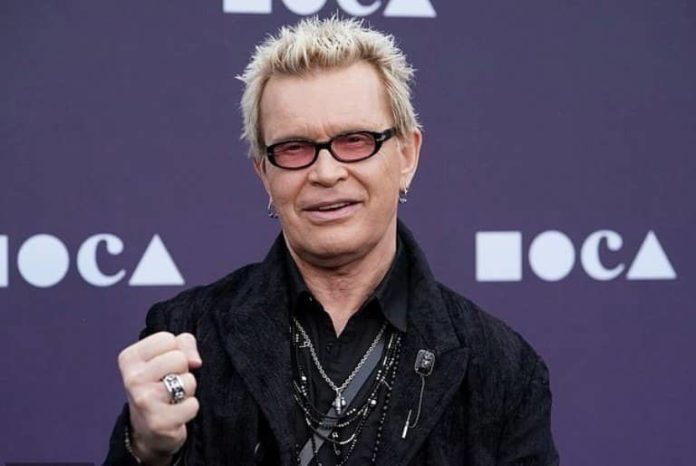 Singers are a gift to the world, they create music that speaks to our hearts and souls, this line is very well proved by William Michael Albert Broad popularly known as Billy Idol who is a singer, musician, songwriter, and actor.

Apart from that, he is best known as the lead singer of the 1970s famous English punk rock band “Generation X”. Moreover, he is the recipient of the MTV Video Music Awards for Best Video from a film for the Video Cradle of Love in 1990.

Born on 30 November 1955, this renowned musician has turned 65 years old in the year 2020. He is a fitness freak and keeps himself fit as a fiddle with a weight of 70 in kilograms and 154 lbs in pounds. He is blessed with a good height which is 5’9” in feet and inches and 175 in centimeters. His blue eyes and blonde hair enhance his personality.

Billy has garnered a huge amount of money through a successful career as a musician for decades. The major source of his income is from his blockbuster hits albums. According to the sources, his estimated net worth is $55 million approximately.

Born in Stanmore, Middlesex, England, the United Kingdom, Billy belongs to the white ethnicity. He was born to his mother, Joan Broad, and father, Bill Broad. He grew up with his younger sister named Jane Broad. when he was two years old, Billy moved to New York with his parents.

Later he also went to Worthing High School for Boys in West Sussex. Furthermore, he also joined the University of Sussex to pursue an English degree in September 1975 but he left after a year in 1976.

Billy Stated his musical career as a guitarist of the newly formed West London 1960s retro band ‘Chelsea’ in late 1976. After some time of performing with Chelsea, Idol co-founded the band “Generation X” along with Tony James, John Towe, and Bob Andrews.

In the band, Billy became the lead singer/frontman, John Towe played the drums, Bob Andrew played guitar and Tony James played the bass. In the year 1978, the band released its first self-titled studio album “Generation X” which was followed by the release of their second studio album “Valley of the Dolls” in 1979.

However, in the year 1980, the band broke up. Later, in the year 1981, in order to pursue a solo career, Billy moved to New York where he found a new partner Steve Stevens who played the guitar. In the same year, he released his first EP ‘Don’t Stop’ which included the Generation X song ‘Dancing with Myself’, and a cover of Tommy James & the Shondell’s song ‘Mony Mony’.

The album’s single ‘Eyes Without a Face’ topped at number four on the US Billboard Hot 100 and ‘Rebel Yell’ reached number six in the UK Singles Chart. Idol released his third studio album “Whiplash Smile” on October 20, 1986. This album includes the hits ‘To Be a Lover’, ‘Don’t Need a Gun’, and ‘Sweet Sixteen’.

In the year 1987, he also released a remix album titled ‘Vital Idol’ which featured a live rendition of his cover of Tommy James ‘Mony Mony’. Apart from that, he appeared in the American biographical film “The Doors” in the year 1991. On 1st May 1990, Billy released his fourth studio album “Charmed Life” by Chrysalis Records.

The album’s lead single ‘Cradle of Love’ has also appeared on the soundtrack of the action comedy film, ‘The Adventures of Tord Fairlane’, and won the 1990 MTV Video Music Award for Best video from a film. His fifth studio album Cyberpunk by Chrysalis Records on June 29, 1993. The album was successful in Europe and UK but didn’t perform well in the USA.

Other than this, in 1996, he appeared in a live version of The Who’s album ‘Quadrophenia’. Idol made a cameo appearance as himself in the romantic comedy film ‘The Wedding Singer’ in which he played a pivotal role in the plot in 1998. In the year 2000, he was invited to be a guest vocalist on Tony Iommi’s debut album ‘Iommi’.

In the same year, he also voiced the character of Odin in the animated fantasy film, ‘Heavy Metal’ 2000 and also providing a song for the soundtrack. He has appeared on VH1’s documentary TV series ‘Behind the Music’ on April 16, 2001.

He also entered the playing field for the half-time entertainment on a hovercraft to the intro of White Wedding in the 2002 NRL Grand Final in Sydney, of which he managed to sing only two words before a power failure ended the performance. On March 22, 2005, he released his sixth studio album ‘Devil’s Playground’ which reached number 46 on the Billboard 200.

Idol also appeared headlining the Sunday night of ‘GuiFest’ in the year 2006. In the same year, he also made his appearance in the reality show, ‘Viva La Bam’ where he helped Bam Margera succeed in creating a sunroof for his Lamborghini Gallardo and performed live for April Margera for his birthday.

In November 2006, his Christmas album titled ‘Happy Holidays’ was released. In July 2009, he performed at the Congress Theater, Chicago for the United States live concert television series ‘Soundstage’. Billy was also announced as one of the acts to play at the Download Festival in Donington Park, England on February 16, 2010.

After some time, in 2012, he appeared on the third episode of the BBC Four series ‘How the Brits Rocked America’. On October 17, 2014, he released his eighth studio album, “Kings & Queens of the Underground” which was debuted at number 34 on the Billboard 200 albums chart and also peaked at number 9 on the Billboard Top Rock albums chart for the week of November 8, 2014.

Later on, on October 7, 2014, his autobiography titled “Dancing with Myself” was published. Idol starred in a public service campaign titled “Billy Never Idles” intended to fight the unnecessary idling of automobile engines in New York City, to reduce air pollution in February 2020.

He has also made his appearance as a vocalist on the song “Night Crawling” from Miley Cyrus‘s album “Plastic Hearts” which released on November 27, 2020. Idol performed ‘Night Crawling’ and ‘White Wedding’ along with Miley Cyrus and Joan Jett at the Super Bowl LV pregame during the concert for health care workers outside Tampa Bay’s Raymond James Stadium in February 7, 2021.

Billy had numerous love affairs but never been married. In the 1980s, he was in a long-term relationship with an English singer, dancer, and former Hot Gossip member Perri Lister. On June 15, 1988, they welcomed a son Willem Wolf Broad. However, their relationship came to an end in 1989.

Apart from that, he has also dated Linda Mathis, a gorgeous actress who was thirteen years younger than Billy. In the year 1988, the couple started to date each other and also shared a daughter named Bonnie blue Broad who born on August 21, 1989.

Here we are providing the list of favorites of Billy Idol: 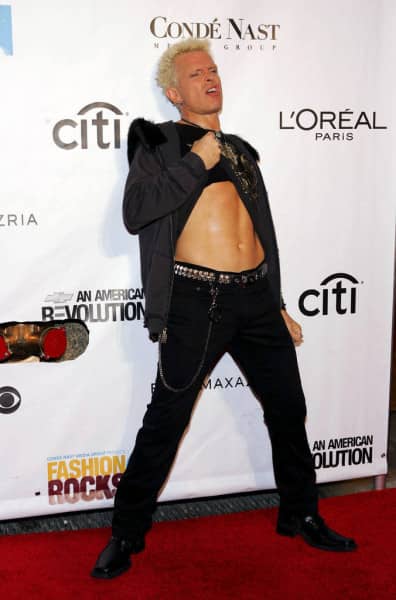 Some Interesting Facts About Billy Idol